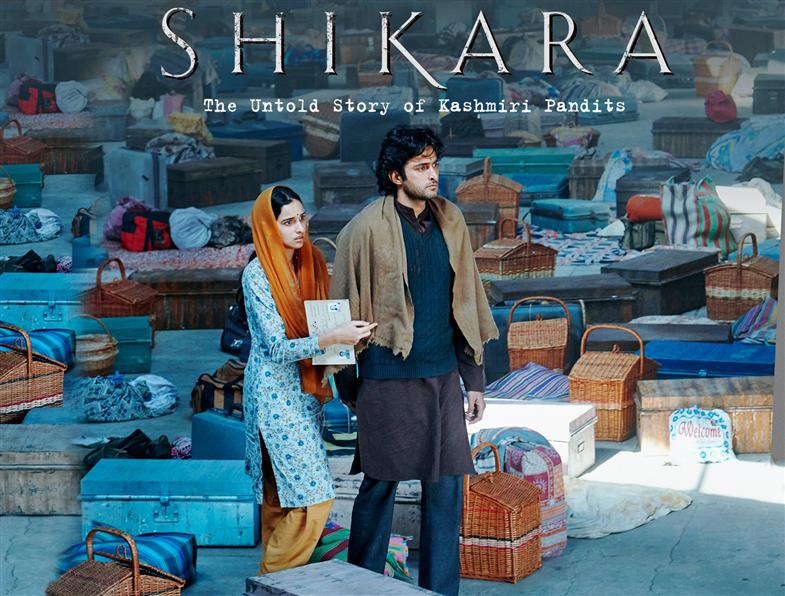 A still from Shikara

At many a public platform, Vidhu Vinod Chopra has declared that the intention behind his film on the unenviable plight of Kashmiri Pandits living in exile for 30 years is certainly not to propagate hatred. And in keeping with these lofty sentiments, there is no rabble rousing, no demonising of any community. In his very own words, as he says in the end credits; the film is a love letter from Kashmir. Not surprising the three words that essentially define Shikara are love, loss and longing and not necessarily in that order.

How the Valley of immeasurable beauty and bounty turned into one of guns and bloodshed, which forced Kashmiri Pandits to leave behind their homes, is dealt with, but only at a human level. The politics of violence and the forces behind it, while Chopra spares himself and his viewers the blame-game, he also plays safe. He dodges the thorny questions and strangely enough places the onus on outside forces.

So, his principal character keeps writing letters to the American President linking the violence in Afghanistan to the Kashmir problem. Then in one scene we have Pakistan’s late Prime Minister Benazir Bhutto ranting on television. The repeated advice of Kashmiri Muslims to Pandits “India chale jaao” too tells a story of alienation. With screenplay co-written by Rahul Pandita, the author of Our Moon Has Blood Clots: The Exodus of the Kashmiri Pandits, and Vidhu’s experiences, the narrative is more personal than political.

Told through the love story of a Kashmiri couple the film is rather tender than cutting edge, which is both its strength and weakness. Sure there are many powerful moments exemplified through panoramic shots. The line of vehicles packed with Kashmiri Pandits, the overview of refugee camps, the anguish of families rendered homeless comes through more than once. Post interval in one particular scene as refugees rush towards a van distributing tomatoes, you literally have a lump in your throat. This is what bonafide citizens of India, a proud community, has been reduced to; not just homeless but also without dignity. Vidhu chooses many more symbolic ways to share the anguish of Kashmiri Pandits. There is no shouting from the rooftop. Why the title itself is a metaphor? Then poems speak in the language of yearning, rather eloquently at that with gifted lyricist Irshad Kamil lending wings to deeply felt emotions. And the same softness suffuses the parts of lead actors. Debutant pair (Sadia and Aadil Khan) makes an assured debut. Portraying the very much in love couple Shanti and Shiv Dhar, they are shown to oscillate between hope and anguish but the film never slips into darkness. The hopelessness of the situation is countered with umeed and more importantly love. Finding succour and support in each other, with the wife constantly telling her husband; mera ghar to aap hai, Vidhu manages to keep it even keeled.

Even the friend-turned-terrorist retains certain humanness. For the intent here is to tell a human story. In the process, the film never becomes a tour de force.

Dedicated to his mother and wife, it remains both a poetic ode and lament. As gentle as the lead protagonist, who keeps writing letters with little hope of an answer, Shikara too doesn’t provide any emphatic answers. Only it poses a question, prodding and lingering, nudging us in the direction, hoping those who matter will pay attention, something they didn’t when the tragedy happened. And all this while Vidhu has our attention and keeps us fully invested in his story.