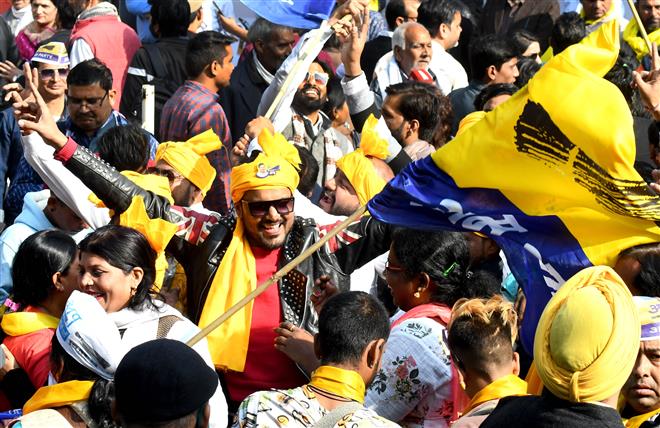 The Aam Aadmi Party on Wednesday ended the BJP’s 15-year run in the Municipal Corporation of Delhi (MCD), winning 134 of the 250 wards while the saffron party ended a close second at 104 in what was seen as the first direct contest between the two parties. The Congress was reduced to nine wards from 31 in 2017. Three Independents also won.

In 2017, the BJP had won 181 of the 272 seats while debutant AAP had bagged 48. This time, the election was held for 250 wards after the government merged the three municipal corporations, which had been divided 10 years ago.

A buoyant AAP convener and Delhi CM Arvind Kejriwal, flanked by his deputy Manish Sisodia and Punjab counterpart Bhagwant Mann, greeted frenzied crowds at the party headquarters in the Capital. “We all have to improve the condition of Delhi. We need the cooperation of all, especially the help and blessings of the Centre and Prime Minister Narendra Modi, to do so,” Kejriwal said, adding the civic body would be purged of “corruption and bribery”. 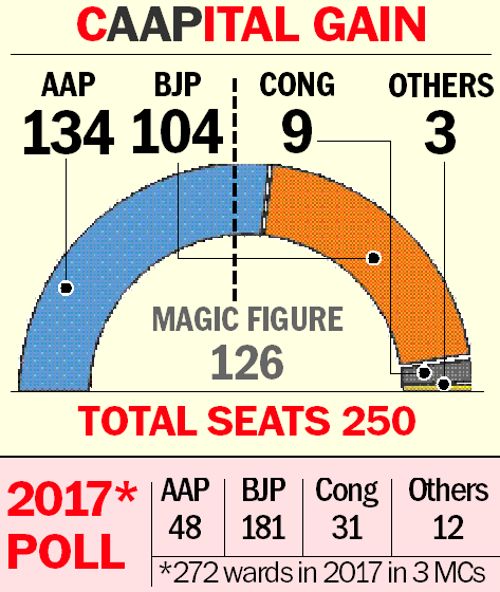 The BJP took heart from the fact that it stayed in the fight despite 15 years of rule and increased its vote share by 3 per cent compared to 2017. It received 39.09 per cent of the total votes polled while AAP’s share soared from 21.09 per cent to 42.05 per cent, according to the State Election Commission data. The Congress got 11.67 per cent of the votes.

Delhi BJP chief Adesh Gupta said their performance had been good despite 15 years of anti-incumbency. “We worked for all-round development, but may be some people were unhappy. There was no visible anger against the BJP though,” said Gupta.

Sisodia, at the centre of an Enforcement Directorate probe into the alleged Delhi excise scam throughout the MCD campaign, thanked the people of Delhi for “helping AAP defeat the world’s biggest and most negative party”.

BJP IT department head Amit Malviya suggested that the mayor’s election was still an open game and noted that Chandigarh, where its rival (AAP) was the largest party, had a mayor from BJP ranks. “Now over to electing a mayor for Delhi. It will all depend on who can hold the numbers in a close contest, which way the nominated councillors vote, etc,” he tweeted. Delhi BJP spokesperson Tajinder Pal Singh Bagga also claimed that the city would again have a mayor from his party. There is no anti-defection law in the MCD.

AAP’s victory came despite the BJP putting up a spirited campaign led by a battery of leaders, including Union ministers Hardeep Puri and Anurag Thakur. Himachal CM Jai Ram Thakur also campaigned while AAP relied on Punjab ministers apart from its Delhi team.