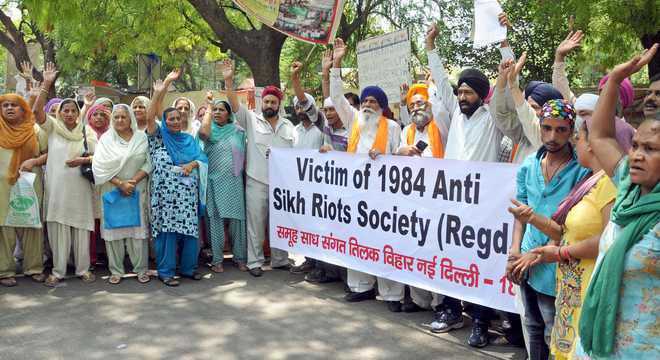 The case is related to the killings of five Sikhs in the Raj Nagar Part-I area in Palam Colony in southwest Delhi on November 1-2, 1984, and burning down of a gurdwara in Raj Nagar Part-II.

The Supreme Court Wednesday granted 4-week parole to former Congress councillor Balwan Khokhar, convicted and sentenced to life in one of the 1984 anti-Sikh riot cases along with former Congress leader Sajjan Kumar, for attending last rites of his deceased father.

Khokhar’s life sentence was upheld by the Delhi High Court in 2018, while it had reversed the acquittal of Kumar by the trial court in 2013, in a case related to the killings of five Sikhs in the Raj Nagar Part-I area in Palam Colony in southwest Delhi on November 1-2, 1984, and burning down of a gurdwara in Raj Nagar Part-II.

The anti-Sikh riots had broken out after the assassination of then prime minister Indira Gandhi on October 31, 1984 by her two Sikh bodyguards.

A bench of Chief Justice S A Bobde and Justices B R Gavai and Surya Kant directed that appellant (Balwan Khokhar) be released from jail on parole to attend the last rites of his deceased father.

“In the circumstances of the case, we consider it appropriate to grant parole to the appellant. Accordingly, we direct that appellant Balwan Khokhar be released on parole for a period of four weeks from today to the satisfaction of the Trial Court,” the bench said.

At the outset, counsel appearing for Khokhar said his client be released from jail to attend the last rites of his deceased father for four weeks.

The bench said he can be release on parole but not on bail for a period of four weeks for attending the last rites.

Senior advocate Dushyant Dave and H S Phoolka, appearing for a complainant in the case, said top court has listed the bail plea of Sajjan Kumar in summer vacation and the application of Khokhar for bail, should not be entertained.

However, the bench said in the circumstances (of his father’s demise), there should not be any objection on Khokhar’s application.

It disposed the plea of Khokhar, with the direction of parole.

The high court, in its verdict of December 17, 2018, had also upheld the conviction and varying sentences awarded by the trial court to the other five—Khokhar, retired naval officer Captain Bhagmal, Girdhari Lal and former MLAs Mahender Yadav and Kishan Khokhar.

It had also convicted them for criminal conspiracy to burn down residences of Sikh families and a gurdwara in the area during the riots.

The trial court in 2013 had awarded life term to Balwan Khokhar, Bhagmal and Lal, and a three-year jail term to Yadav and Kishan Khokhar.

Following the high court verdict, life term of Balwan Khokhar, Bhagmal and Lal has been upheld and the sentence of Yadav and Kishan Khokar has been enhanced to 10 years in jail.

The high court, in its judgement, had said the riots were a “crime against humanity” perpetrated by those who enjoyed “political patronage” and aided by an “indifferent” law enforcement agency.

The top court on November 6, last year had directed that Kumar be examined by a panel of AIIMS doctors, after he sought urgent listing of his bail plea on health grounds.

The top court had refused to urgently hear Kumar’s bail plea and said that it would hear the bail application in the summer vacation.

The former Congress leader had then claimed to have lost eight to 10 kg weight in the 11 months he has spent in jail and said that he has been suffering from various other ailments.

On August 5, last year, the top court had said it would hear Kumar’s bail plea in May 2020 as it was not an “ordinary case” and required detailed hearing before any order is passed.

Kumar resigned from the Congress after he was convicted by the high court.

Kumar has also challenged in the apex court the Delhi High Court’s verdict of December 17 last year that awarded him life imprisonment for the “remainder of his natural life” in the 1984 anti-Sikh riots case.

The high court had convicted him for the offences of criminal conspiracy and abetment in commission of crimes of murder, promoting  enmity between different groups on grounds of religion and doing acts prejudicial to maintenance of communal harmony and defiling and destruction of a gurdwara. — PTI