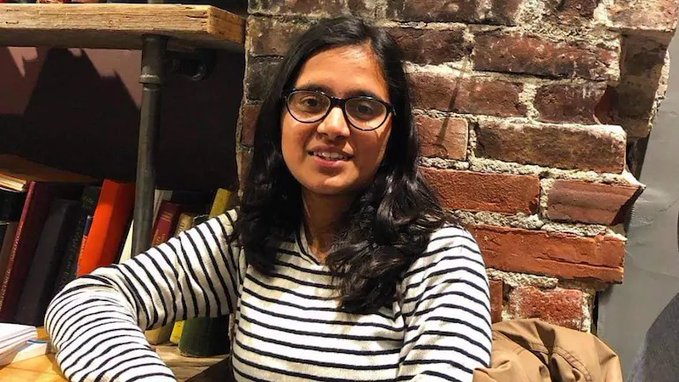 A 20-year-old student from Uttar Pradesh's Gautam Buddh Nagar, who was studying in a US college, died in a road crash here, with her family claiming the accident happened as some motorcycle-borne men were allegedly following her two-wheeler and harassing her, officials said Tuesday.

The incident took place in Aurangabad area here on Monday morning when Sudiksha Bhati was riding pillion on a motorcycle with her younger brother, a minor, they said. The two were en route to their maternal uncle's home in Khanpur area here from their house at Deri Scanar village in Gautam Buddh Nagar's Dadri tehsil, the officials said.

The eldest among six siblings, she had an envious academic record.

"She got admitted in our school in 2011 in Class 6. In 2018, she scored 98 per cent marks in class 12 examination and topped the district,” said Bishwajit Banerjee, the principal of Sikandrabad Vidyagyan School, Bulandshahr.

She then went onto win a Rs 3.8-crore scholarship from Babson College, Massachusetts (US), and was pursuing a graduation course in entrepreneurship, he said.

Her father runs a tea shop. Her family members said she had come to India due to the coronavirus pandemic and was scheduled to go to the US on August 20.

They also alleged that while going to her maternal uncle Monday, she was being harassed by the unidentified persons during the ride which led to the accident, prompting Bulandshahr district administration to order a probe.

Additional Superintendent of Police (City) Atul Kumar Srivastava said, “There was traffic on the route. A Bullet (a Royal Enfield motorcycle) which was moving ahead of them suddenly stopped due to braking, and the two-wheeler of Sudiksha Bhati and her brother rammed into it from behind."

"She suffered injuries in the crash and was taken to a community health centre, but she died," he said, citing preliminary information from her brother and others who witnessed the incident.

In a purported video that has surfaced on social media, her brother said, "We were on a motorcycle at a speed of 30 km per hour. The men on the Bullet were riding near us and applied brakes on their vehicle suddenly... The Bullet had ‘Jat Boys' inscribed on its number plate and its number started with UP-13."  ASP Srivastava, however, said the woman's brother had not mentioned anything about harassment to the police at the time of the incident.

District Magistrate Ravindra Kumar said, “We are enquiring into the allegations of harassment. We'll record statements of people concerned and gather video footages. Arguments and counter-arguments will be taken into account and probe carried out as per evidence.”

He also clarified that it was the younger brother of the woman and not the uncle, as being told by some people, who was riding the two-wheeler.

According to the woman's uncle, the younger brother, a minor, was riding the motorcycle without a helmet, the DM added.

He said officials in Bulandshahr are trying to contact Sudiksha's family in Dadri, but have been unable to reach them over the phone. They have been sent to their home and further investigation is underway, he added. PTI