A central government source says the hospital has ‘sufficient balance of oxygen and a tanker has reached the hospital, which will fill up the storage capacity’ 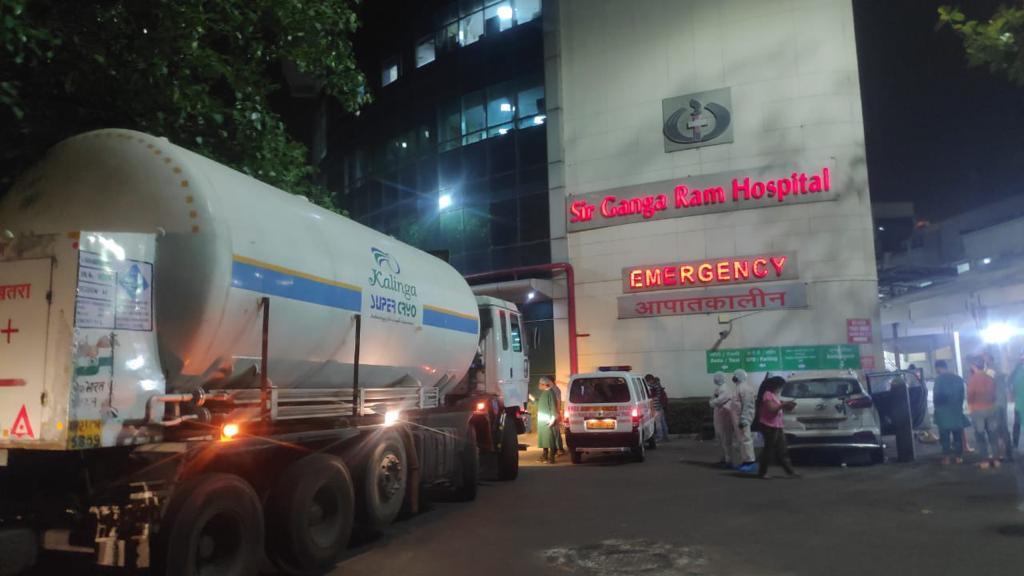 Hospital authorities are resorting to manual ventilation in ICUs and the emergency department.

Twenty-five Covid patients have died at Sir Ganga Ram Hospital here in the last 24 hours, and the lives of 60 other such patients are at risk, officials said on Friday, amid a serious oxygen crisis unfolding in the national capital.

Sources said "low pressure oxygen" could be the likely cause for the deaths.

A central government source said the SGRH had "sufficient balance of oxygen and a tanker has reached the hospital, which will fill up the storage capacity".

The tanker reached the hospital around 9.20 am. The stock could last up to five hours, depending on the consumption, an official at Sir Ganga Ram Hospital said.

"All we need is uninterrupted and timely supply of oxygen,” SGRH Chairman Dr DS Rana said.

There are more than 500 coronavirus patients, including around 150 on high-flow oxygen support, admitted to the hospital located in central Delhi.

"Ventilators and BiPAP machines are not working effectively. Lives of 60 other patients at risk. Major crisis likely," a senior official at the hospital said.

The hospital authorities are resorting to manual ventilation in ICUs and the emergency department, according to the official.

On Thursday night, the hospital officials had sent an SOS to the government, saying there's only five hours of oxygen left at the health care facility and requesting that it be replenished urgently.

"At 8 pm, oxygen in store is for five hours for peripheral use till 1 am and less for high-flow use. Need urgent oxygen supplies," an official had said.

The hospital had received some oxygen around 12.30 am, but the stock had to be supplemented later, sources said.

"A tanker carrying two tonnes of oxygen is stuck near Ambedkar Hospital," a source said.

Several private hospitals in the city have been struggling to replenish their oxygen supply for the last four days.

Some of them have even requested the Delhi government to transfer patients to other health care facilities.

While some hospitals have managed to make short-term arrangements, there is no immediate end to the crisis in sight, a government official had said on Thursday.

As patients and their family members waited outside hospitals, hoping to get a bed, Delhi Health Minister Satyendar Jain on Thursday had said beds would be increased in large numbers once the oxygen crisis was resolved.

A government doctor said hospitals in Delhi are wary of admitting more patients amid a serious shortage of oxygen in the city. PTI