CM Dhami announced financial assistance of Rs 2 lakh each for the next of kin of the deceased and Rs 50,000 for the injured 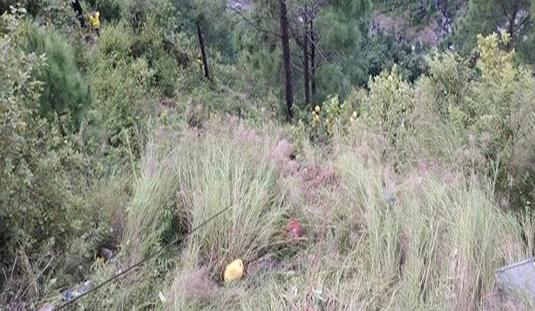 Thirty-three members of a wedding party were killed and 19 injured when a bus carrying them fell into a gorge in Uttarakhand’s Pauri Garhwal district, police said on Wednesday.

The tragedy struck at around 7 pm on Tuesday as the bus, which was on its way to Kanda village in Bironkhal from Laldhang town in Haridwar, plunged into the 500-metre deep gorge near Simri bend.

Local villagers were the first to reach the spot and and used mobile phone flashlights to look for the victims in the night before assistance arrived.

There were over 50 people in the bus. Rescue operations were carried out throughout the intervening night and on Wednesday, the police said.

Thirty-one bodies were retrieved while two injured succumbed on way to the hospital taking the death toll in the mishap to 33, State Disaster Relief Force (SDRF) incharge Vikas Ramola said this evening adding the rescue operation has come to an end.

“Climbing down the steep gorge in the darkness, with the just mobile phone flashlight, was really challenging,” said a villager Rajkishore who lent a helping hand to the SDRF personnel in extricating the victims from the mangled remains of the bus.

Twenty people injured in the accident were pulled out and rushed to hospitals in Bironkhal, Rikhnikhal and Kotdwar, police said.

Two of them died on the way to the hospital, they said.

Another man who was injured in the mishap had tried to walk to safety on his own and the rescue teams could not spot him but he later walked back to the accident site, the SDRF said adding he has also been hospitalised.

The bus accident in Pauri district did not just snuff out lives but also ruined many families.

Among them was 58-year-old Chandraprakash who lost sons Satish (34) and Anil (30), their wives Varsha (28) and Anjali (24) respectively, and a grandson in the accident.

Chief Minister Pushkar Singh Dhami, who along with former Union minister Ramesh Pokhriyal Nishank arrived for an on-the-spot assessment of the situation, met the people hospitalised in Kotdwar.

Dhami announced financial assistance of Rs 2 lakh each for the next of kin of the deceased and Rs 50,000 for the injured.

He also directed the district administration to identify the villagers who were the first responders to the incident so that they could be rewarded.