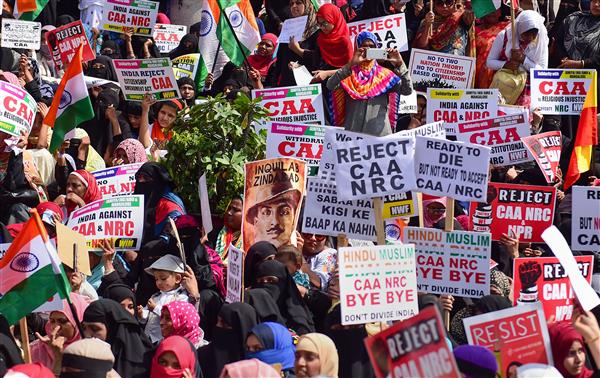 Parties led by the DMK in Tamil Nadu on Saturday lashed out at the police for alleged use of force on anti-CAA protesters here and sought action against personnel involved in it.

With the government coming under opposition attack over the violence, the ruling AIADMK reaffirmed its commitment to the Muslim community and said “Goebbels like propaganda” against it would not work.

The city police asked the public to not to share any “provocative” messages on social media in this connection, even as anti-CAA protests by members of the Muslim community continued in different parts of the state.

Tamil Nadu Revenue Minister RB Udayakumar said the “Amma government” had always accorded high priority for the welfare of Muslims and saw to it that they were not “even minutely affected” in any way.

Speaking to reporters in Madurai, he said Chief Minister K Palaniswami and his deputy O Panneerselvam were “protecting the Muslims like their children and family members”. “Those unable to stomach this are unleashing lies and Goebbels like propaganda, but that will not benefit them. The people will also not believe them,” he said.

DMK President M K Stalin said Friday’s protests had been held in a peaceful manner and sought to know why the police used force to disperse them.

“Lathicharge was done unnecessarily on the peaceful people for no reason and this prompted people across the state to take to the streets,” Stalin said in a statement.

He said Friday had been turned into a “black night” for the protesters by the police.

On Friday, an anti-CAA protest by Muslims had turned violent, with reports of police force and lathicharge on protesters. Several people were reportedly wounded in the protests, including four police personnel.

The incident had led to sporadic protests across Tamil Nadu, including at Washermanpet in the city, where the violence erupted, but protesters subsequently called off the agitation, following talks with City Police Commissioner AK Viswanathan.

On Saturday, Stalin demanded that any cases in this connection be withdrawn and sought action against policemen who allegedly resorted to lathicharge.

Hitting out at the AIADMK, the DMK chief said while the ruling party had voted in favour of the amended Citizenship Act in the Parliament, it was also not enacting an Assembly resolution against CAA, a demand putforth by his party.

“Using force in peaceful protests amounts to stirring up a hornet’s nest,” the independent legislator said in a statement.

He wished such incidents did not repeat.

The Vaiko-led MDMK adopted a resolution in its district secretaries meeting, slamming the police for allegedly using force against protestors.

BJP leader H Raja, whose party is an ally of the AIADMK in Tamil Nadu, slammed the violence against police personnel in the protests.

In a tweet, he said: “Rioters should be dealt with an iron fist”.

Later, he told reporters that he wanted to check if any public said to be injured in yesterday’s incident had been admitted to the government hospital, but there were none.

“People of Tamil Nadu follow peace and maintain law and order. That tradition has to be followed,” he said.

Protests continued in parts of the state including here, Cuddalore and Ramanathapuram by members of the Muslim community, both against the CAA as well as demanding action over on Friday’s episode.  Protests spread across Chennai, and other parts of the state, including Nagercoil, Madurai, Virudhunagar, among other places.

The protesters also demanded the Tamil Nadu government to pass a resolution in the Assembly against the implementation of the CAA.

Meanwhile speaking to media, Chennai Police Commissioner A.K. Viswanathan said they had visited police officials who were injured at the protest site on Friday and no public was injured.

Viswanathan said permission has not been granted for holding the protests.

DMK President MK Stalin urged the Tamil Nadu government to withdraw the cases against the protesters, while condemning the police action on them late on Friday.

He also said the state government should permit holding of peaceful protests.

Stalin said the protests were held peacefully and he demanded the state government to pass a resolution against the CAA on Friday evening.

He said Tamil Nadu Police has been denying permission to hold protests in Chennai, Madurai and other places similar to that of being held in Delhi's Shaheen Bagh.

Jawahirullah said the police had not kept their word of giving permission to hold anti-CAA protest when approached. The protesters decided to hold protest on Friday and the police took action against them.

He also demanded action against the police officials and release of those arrested. Agencies