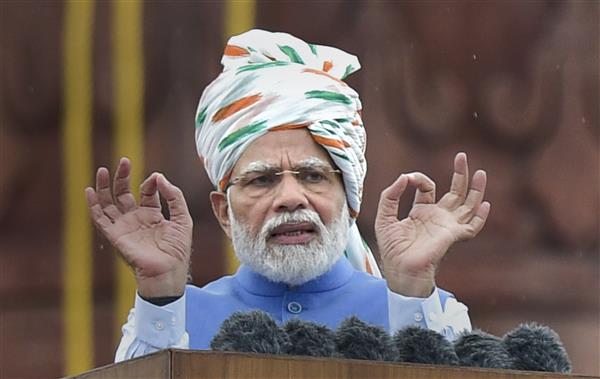 Prime Minister Narendra Modiu addresses the nation from the ramparts of the Red Fort on the 76th Independence Day, in New Delhi on Monday. A video grab

The Prime Minister touched upon all-round development of technology in the country from 5G to push for electronic chips, laying of optical fibre cable (OFC) network across villages and enablement of digital entrepreneurship in villages through Common Services Centres making the present decade as “techade” for India.

“Now, we are stepping towards the era of 5G... won’t have to wait for long. We are taking optical fibre to every village. I have full knowledge that the dream of Digital India will pass through villages.

“I am happy that India’s 4 lakh common service centres are developing in villages. Country can boast of 4 lakh digital entrepreneurs getting ready in villages and people in villages becoming habitual of taking services from them,” Modi said.

Besides powering ultra-low latency connections, which allow downloading full-length high-quality video or movie to a mobile device in a matter of seconds (even in crowded areas), the Fifth Generation or 5G would enable solutions such as e-health, connected vehicles, more-immersive augmented reality and metaverse experiences, life-saving use cases, and advanced mobile cloud gaming, among others.

Bharti Airtel will start rolling out 5G services this month and cover all towns and key rural areas of the country by March 2024. Country’s largest telecom player Jio has completed 5G coverage planning in top 1,000 cities and conducted field trials of its home-grown 5G telecom gears.

Modi said that the country frequently remembers former Prime Minister Lal Bahadur Shastri and his mantra of “Jai Jawan Jai Kisan” which is an inspiration for the country.

“Later, Atal Bihari Vajpayee added a link by saying “Jai Vigyan (Science)” and the country had given priority to it. But now for Amritkaal there is one more necessity and that is “Jai Anusandahan (research)”- Jai Jawan, Jai Kisan, Jai Vigyan, Jai Anusandhan”- Innovation. I have faith in my young generation,” Modi said.

He said that the power of innovation is visible in the form UPI (Unified Payment Interface) BHIM, digital payment, India’s global rank in fintech space and 40 per cent share globally.

Modi said that the digital India movement where the government is taking steps towards 5G, treading towards semiconductors, laying a network of optical fibre, is not only a sign of modernisation but there are three big powers embedded in it.

Modi said that the Atal Innovation Mission, incubation centres and the country’s startups are developing new areas, bringing new opportunities for youth of the country.

He called for becoming self-reliant in the energy sector with the adoption of solar energy to Mission Hydrogen to adoption to electric vehicles. “We need to take these initiatives to the next level for energy independence,” Modi said.

He said that India’s industrial growth will come from the grassroots.

“Our Micro, Small and Medium Enterprises (MSMEs), street vendors & those working in the organised sectors need to be strengthened,” he said.

Modi vowed to fight against corruption with full vigour.

“We have to fight against corruption with all our strength. In the last eight years, use of Aadhaar, Direct Benefit Transfer (DBT) and mobiles were used to find Rs 2 lakh crore of black money,” he said.

Modi said that people from across the world are trying their luck under the production linked incentive (PLI) scheme.