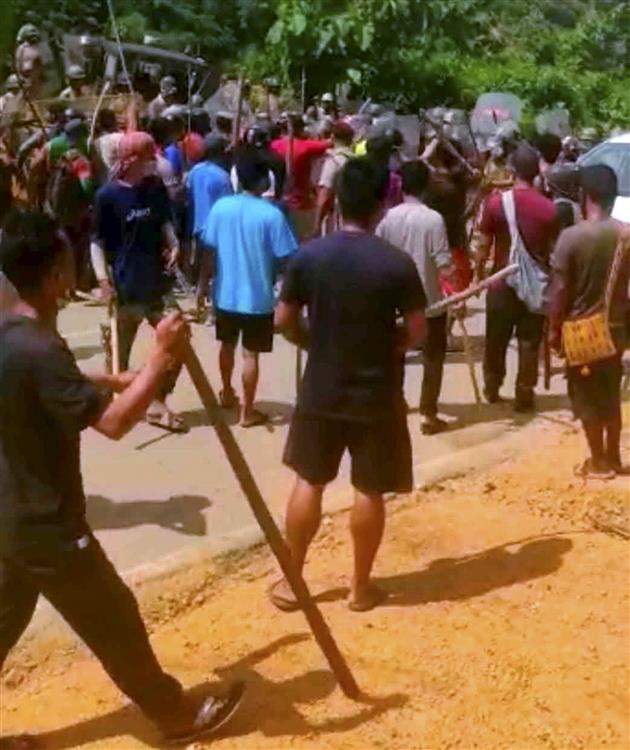 Police personnel during a clash at Assam-Mizoram border at Lailapur in Cachar district, Monday, July 26, 2021. PTI

At least six personnel of the Assam Police were killed in firing by miscreants from neighbouring Mizoram on Monday as violence escalated along the inter-state border in the Cachar district, Chief Minister Himanta Biswa Sarma said.

A senior Assam Police officer, who is still inside the forest amid continuous firing from across the border, told PTI that at least 50 personnel, including Cachar Superintendent of Police Nimbalkar Vaibhav Chandrakant, were injured in firing and stone-pelting.

“I am deeply pained to inform that six brave jawans of @assampolice have sacrificed their lives while defending constitutional boundary of our state at the Assam-Mizoram border. My heartfelt condolences to the bereaved families,” Sarma tweeted.

The senior police officer said miscreants from across the border suddenly started firing when civil officials of both sides were holding a dialogue to sort out the differences.

“I immediately cannot say how many people have been injured, but my guess is at least 50 personnel. Our SP was also injured in the firing and a bullet hit his leg,” the officer said over the phone.

The IPS officer spoke to PTI while he was hiding inside a forest and firing could be heard in the background.

“I along with the team are still sitting at the foothills. We were engaged in a dialogue with Mizoram’s Kolasib SP Mr Ralte and his additional SP. Assam Police IGP, DC, SP all were there and talking to find a solution to the problem.

“We did not allow our public to go there, but their people were constantly throwing stones. Many were injured. They were also hitting us with marbles using catapults. As we were talking, suddenly they opened fire from the hilltop. They fired aiming at us while we were having the meeting,” he said.

“There is a constant flow of injured personnel. As we are talking, another vehicle with a few more injured persons entered the hospital. All of them have bullet and pellet injuries. We have called in all doctors and formed different teams to treat the injured,” he said.

A senior doctor, who wished not to be named, said the Cachar SP’s condition was critical with one bullet hitting his thigh, besides he also got injured in the abdomen.

“He lost blood and we have infused him with one unit of blood. I guess more blood will be required,” he added. PTI