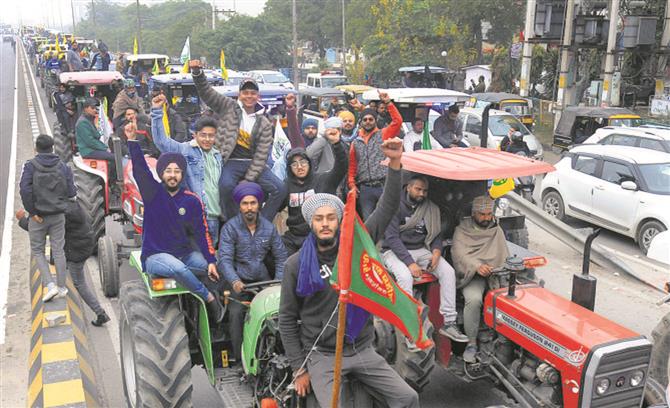 The farmers’ unions today claimed to have got permission from the Delhi Police to hold a tractor parade on Republic Day even as the latter said the talks over the matter “are in final stages”.

A senior police official said since it was a sensitive matter, a decision on allowing the rally would be taken only after details of the route, registration number of vehicles and owners’ identification were shared with the authorities.

GS Charuni, Haryana BKU president, on Saturday appealed to farmers and their supporters not to oppose Haryana ministers/political leaders at Republic Day events. He said farmers would continue opposing the ministers at rallies and events on other days. “I request you not to oppose any minister or political leader invited to unfurl the Tricolour on Republic Day,” he said in a video message.

A union leader claimed they had agreed not to organise the tractor parade on the Delhi’s Outer Ring Road while the police authorities had agreed to remove the barricades from the Singhu and Tikri borders to facilitate the movement of tractors. The protesters would use five routes.

Rajinder Singh Deep Singhwala, vice-president, Kirti Kisan Union, who was part of the meeting with the police authorities, said the farmers would hold the parade on a 60-km stretch, half of which was inside the national Capital.

“Citing intelligence reports, the police told us that they were expecting a rush of 70,000 to 1 lakh tractors. The police were worried about the impact of the parade on the main Republic Day event if we followed the Outer Ring Road route. While we agreed to change the route, the police assured us of cooperation,” Singhwala claimed.

As per the last Census, Punjab has five lakh tractors.