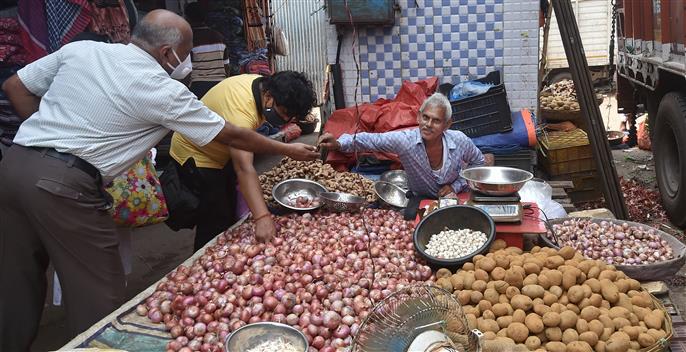 Customers buy onions at a wholesale market as the vegetable prices continue to soar in the country, in Kolkata on October 28, 2020. PTI  photo

In an effort to boost domestic supply and check price rise, Consumer Affairs Minister Piyush Goyal on Friday said private traders have already imported 7,000 tonnes of onion and another 25,000 tonnes are expected to arrive before Diwali.

Besides, 30,000 tonnes potato is being imported from Bhutan in order to improve the local supply and control prices of the key commodity, he added.

"Retail onion prices are stable in last three days at Rs 65 per kg. The government has taken proactive measures to check price rise. Exports were banned timely and took steps for import," Goyal said at a digital press conference.

The government relaxed fumigation norms for import of onion till December. So far, 7,000 tonnes of onion has been imported by private traders, he said.

"Another 25,000 tonnes of onion is expected to arrive before Diwali," he said, and added along with imports, the arrival of new kharif crop in mandis from next month will help improving the supply situation and ease pressure on prices.

The minister said that onion is being imported from countries like Egypt, Afghanistan and Turkey by private traders. Even Nafed will import on its own capacity.

The government has relaxed fumigation norms for import of onion and export of onion seeds have been banned, he added.

Among other measures, stock limits have been imposed on traders to curb hoarding and black marketing and Nafed, which is holding buffer stock of onion on behalf of the government, is offloading stock in the open market.  So far, Nafed has offloaded 36,488 tonnes.

In case of potato, Goyal said its prices have been rising and all India average retail price has been stable at around Rs 42 per kg for last three days.

However, the government has taken steps to import potato. About 30,000 tonnes of potato is arriving from Bhutan in next couple of days, the minister said.

"We are going to import about 10 lakh tonnes of potato and bring prices under control," he added.

Meanwhile, the central government on Friday permitted imports of potatoes from Bhutan without licence, a move aimed at boosting domestic supply and control prices of the agricultural commodity.

The imports are allowed without licence only up to January 31, 2021, the Directorate General of Foreign Trade (DGFT) said in a notification.

Imports of potatoes, otherwise, fall in the restricted category, which means that an importer requires a licence from the DGFT for the inbound shipments. But, the government on Friday partially relaxed the import norms.

“Import of potatoes...is allowed for import from Bhutan without licence up to January 31, 2021,” it said.

In a public notice, the Directorate has laid out the procedure for import of potatoes under the TRQ (tariff rate quota) scheme.

According to the procedure, only one application against one IEC (import export code) will be considered and successful applicants will have to ensure that the import consignment reaches the Indian ports on or before January 31 next year.