The artwork showcases animal forms, musical instruments complemented with delightful dash of colours, with of course, a nod to the tricolour. 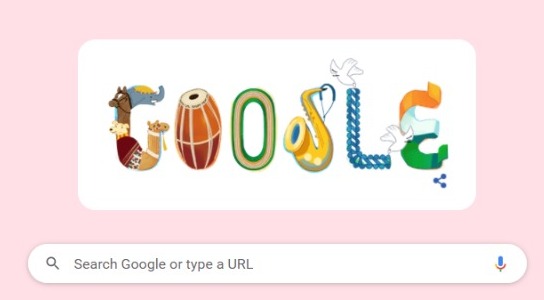 Elephants, camels, saxophone and various other rich elements from the annual January 26 ceremonial parade on Rajpath, have been depicted in a vibrant doodle by internet search giant Google to mark India's 73rd Republic Day on Wednesday.

The artwork showcases animal forms, musical instruments complemented with delightful dash of colours, with of course, a nod to the tricolour.

In a note released on the august occasion, the company said, "Today's Doodle celebrates India's Republic Day, commemorating 72 years since the Indian Constitution took effect and the nation completed its transition to an independent republic".

The Indian Constitution was adopted on November 26, 1949 and officially enacted on this day in 1950 to coincide with the day the Indian National Congress declared 'Purna Swaraj' or “complete freedom," it said.

The doodle portrays the elements of the grand parade, with each letter of 'Google' embedded with lot of symbolism.

The 'G' has been formed with a wonderous mix of an elephant, a camel, a horse and a dog, being depicted together. All four animals are seen in the parade.

The 'O' next to it had been made using the image of a 'tabla', while the other 'G' had been depicted with a curvy saxophone, a wind instrument using by the bands in the parade.

Two doves, a symbol of peace, fly around the letter 'L' symbolically depicting the parade route with blue colour, standing next to the 'E' which is suffused in tricolour, representing the Indian flag.

Google, in its note further said, across the South Asian subcontinent, Republic Day is celebrated over a three-day period with cultural events that "honour the resilience, history, and diverse social fabric of the world's most populous democracy".

"The largest official display of national pride held today is the Republic Day Parade—elements of which are depicted in the Doodle artwork—from left to right, parade animals: an elephant, a horse, a dog, a camel; a red tabla; the parade path; a saxophone as part of the iconic camel-mounted band; doves; and the tricolours of the national flag," it said.

Along Rajpath, a ceremonial boulevard in the Indian capital of New Delhi, this momentous parade features a float for Indian states alongside dozens of bands, folk dancers, and government officials, the note said.

In 2021, vibrant colours, art, and architectural, cultural and sartorial heritage of India was captured in a fascinating doodle to mark the Republic Day.