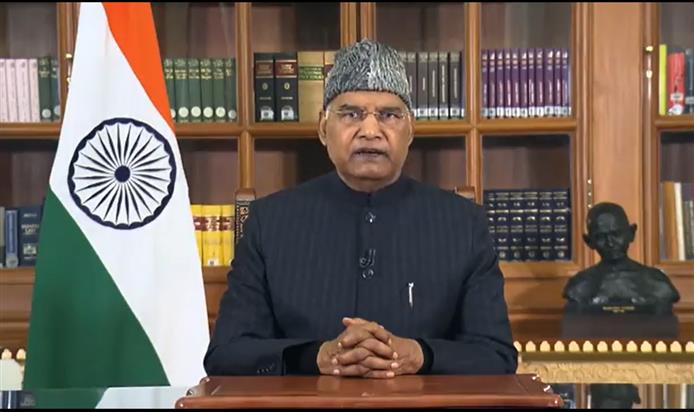 President Ram Nath Kovind on Tuesday hailed the transformation of a Haryana village by its natives saying a new India, which was strong and sensitive, was emerging.

Urging all successful people to work for the development of their birthplaces, the president said rights and duties were two sides of the same coin and doing one’s duty well was the foremost contribution to the nation.

In his address to the nation on the eve of the 73rdRepublic Day, the president made a special mention of citizens of Bhiwani’s Sui village collaborating to transform the area under ‘Swa-Prerit Adarsh Gram Yojana’, thereby demonstrating sensitivity.

“This example strengthens my belief that a new India is emerging – a strong India and a sensitive India;Sashakt Bharat, Samvedan-sheel Bharat. I am sure that taking inspiration from this example, other resourceful people will also contribute for the development of their villages and cities,” said the president crediting his own native village Paraunkh in UP for his ascent to the Rashtrapati Bhavan.

The president urged successful people to remember their roots and “serve their place of birth and the country in whatever way they can”.

Noting that the observance of fundamental duties mentioned in the Constitution creates proper environment for the enjoyment of fundamental rights, President Kovind said by fulfilling the fundamental duty of rendering national service when called upon to do so, Indians had transformed the Swachh Bharat Abhiyan and Covid vaccination drive into mass movements.

The president however cautioned against lowering the guard saying Covid pandemic was still widespread.

“Inthe fight against Covid, it has become a sacred national duty to follow the precautions suggested by our experts. We have to discharge this duty till the crisis isbehind us,” the president said referring to green shoots in the economy.

He said the economy was on the move and was projected to grow at an impressive rate in this fiscal after going through contraction last year.

“This shows the success of the Atmanirbhar Bharat Abhiyan launched in the previous year. The government has shown relentless focus on reforming every economic sector and providing a helping hand wherever necessary,” President Kovind noted, crediting impressive economic performance to improvements in the agriculture and manufacturing sectors.

Lauding self-reliance in defence, the president said due to military capabilities like the soon to be inducted indigenous state-of-the-art aircraft carrier IAC Vikrant, India was now counted among the world’s leading naval powers. He remembered late CDS Gen Bipin Rawat saying, “When a brave soldier dies on duty, the entire country feels sad.”

The president also spoke of women breaking the glass ceiling in the armed forces noting that better gender balance will benefit the forces.

“As the supreme commander of the armed forces, I am glad to note that it has been a water-shed year for women empowerment in the armed forces. Our daughters have broken a glass ceiling, and permanent commission has now been allowed for women officers in new areas,” the president said, adding that the talent pipeline for the forces will be strengthened with women coming through Sainik Schools and the National Defence Academy.