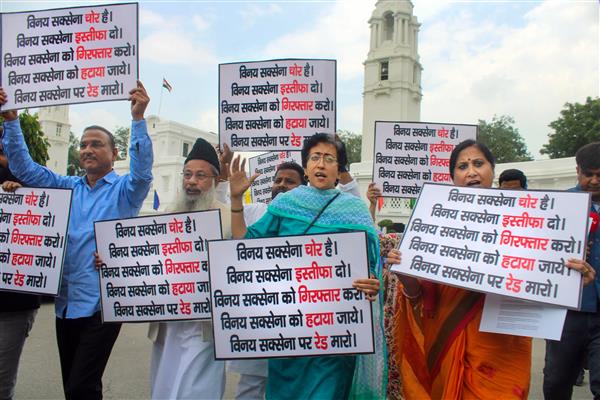 AAP MLAs protest against the Lt-Governor outside the Assembly. PTI

The ongoing tussle between AAP and the Opposition BJP in Delhi took a turn for the worse today with AAP MLAs demanding a probe against Lieutenant-Governor VK Saxena for allegedly exchanging demonetised notes with face value of Rs 1,400 crore during his tenure as the KVIC chairman in 2016.

Hours after the ruling AAP announced its night-long sit-in against the L-G on the Delhi Assembly premises, BJP MLAs also started an overnight dharna demanding the sacking of ministers Manish Sisodia and Satyendar Jain over alleged corruption.

AAP MLAs demanded a probe by the CBI and the ED against the L-G. The BJP hit back with allegations of a “scam” in the education department claiming the Delhi Government increased the budget for the construction of classrooms in its existing schools while “ignoring” the guidelines issued by the Central Public Works Department.

Citing a Central Vigilance Commission (CVC) report sent to the Delhi Government’s vigilance department in 2020, the BJP alleged that the construction cost was hiked by Rs 326 crore, which was 53 per cent more than the tender amount. Saxena last week sought a report from the Chief Secretary over a delay of more than two and a half years in acting on the CVC report.

AAP MLA Durgesh Pathak alleged on the floor of the House that Saxena pressurised his employees to exchange demonetised currency when he headed the Khadi and Village Industries Commission (KVIC). “Cashiers Pradeep Yadav and Sanjeev Kumar stated on record that after demonetisation, an illegitimate exchange of Rs 22 lakh in cash took place from their (Delhi) branch alone,” said Pathak. There was no immediate reaction from Saxena to AAP’s allegations.

The development came days after Saxena recommended a CBI probe into alleged corruption in the implementation of the Delhi Excise Policy 2021-22 and the AAP’s accusations that he was “interfering” in the city government’s work.