Addressing a press conference, BJP MPs allege that the AAP is doing a ‘drama’ of being an ‘anti-corruption’ party and the investigation will ‘expose’ them 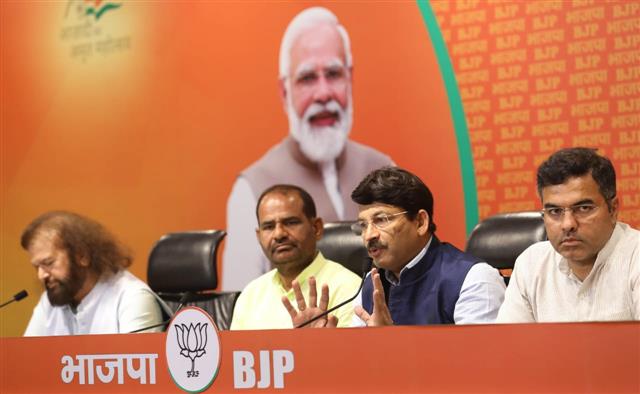 The claims by AAP MLAs that they have been approached by the BJP and offered up to Rs 20 crore to switch sides is a matter of forensic investigation and they should undergo a lie-detector test, the BJP said on Wednesday.

Addressing a joint press conference, BJP MPs Manoj Tiwari, Ramesh Bidhuri, Hans Raj Hans and Parvesh Verma alleged that the Aam Aadmi Party (AAP) is doing a "drama" of being an "anti-corruption" party and the investigation would "expose" them.

"Since they have claimed that the BJP has offered them up to Rs 20 crore, it is a matter of forensic investigation. Why are they not revealing names of those who called them? Why no legal action has been taken against those making poaching attempts?" Tiwari said.

The former Delhi BJP president claimed that AAP leaders had been constantly changing their statements on the excise policy issue.

Verma called for a "lie-detector test" for the AAP MLAs so the investigation could "expose their drama of being anti-corruption".

The comments by the saffron party MPs came a day after seven BJP MPs in Delhi wrote to Lt-Governor VK Saxena seeking an inquiry into the allegation by Chief Minister Arvind Kejriwal and his deputy Manish Sisodia that AAP MLAs were offered Rs 20 crore to switch sides.

Labelling the allegation by Kejriwal and Sisodia as also by other AAP leaders as "malicious, false and misleading", the BJP Lok Sabha MPs alleged it was an "attempt to divert attention from the liquor scam of the Delhi government".

The Delhi deputy chief minister has been named as an accused by the CBI in its FIR registered in the probe into the alleged irregularities in the implementation of the Delhi Excise Policy, 2021-22.