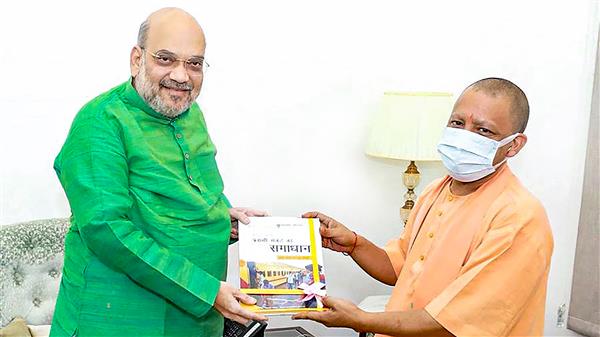 Amid reports of dissent in state BJP and speculations of a rejig of the Cabinet to balance crucial caste equations in the poll-bound Uttar Pradesh, Chief Minister Yogi Adityanath on Thursday met Home Minister Amit Shah for what he called a “courtesy call” for ‘marg-darshan’ (guidance) of the senior party leader.

Adityanath is expected to meet Prime Minister Narendra Modi and BJP president J P Nadda on Friday, incidentally the first time in person since political turmoil hit the state BJP along with the second wave of the Covid-19.

There have been reports of “differences” between Adityanath and Prime Minister Modi over the induction of former Gujarat-cadre IAS officer Arvind Kumar Sharma in the UP Cabinet.

Adityanath’s two-day visit also follows the high-profile entry of Congress’ Brahmin’ face in UP, Jitin Prasada, into the saffron party.

Though those close to Adityanath called the expected meeting with PM a “routine visit by a CM of a state”.

“The PM routinely meets chief ministers. The UP CM had made the request much earlier, however, it got delayed due to the pandemic,” they said.

Many in the state BJP have been openly critical of Adityanath over “mishandling” of the second wave of the Covid pandemic and have also voiced concern to the top leadership over the impact people’s anger may have on polls next year.

Apart from accusations of “mismanagement” and the anti-incumbency factor, Yogi Adityanath is also facing allegations of “favouring” the Thakur community at the cost of Brahmins.

Sharma and Prasada are believed to be part of the BJP’s re-boot plan to gain the favour of the community. The buzz is that PM Modi may also induct some state leaders in his Cabinet to assuage the feelings of the powerful Brahmin lobby of eastern parts and control the damage.