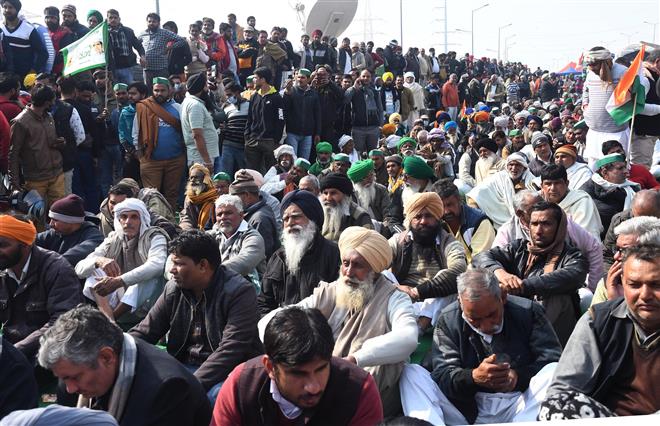 Farmers during their ongoing protest against the new farm laws, at Ghazipur Border in New Delhi on Friday. Tribune photo: Manas Ranjan Bhui

India’s agricultural sector has proved its resilience amid adversities of COVID-induced lockdown with agriculture and allied activities clocking a growth of 3.4 per cent at constant prices during 2020-21, the government’s economic report card has said.

In fact, according to the Economic Survey tabled by Finance Minister Nirmala Sitharaman in Parliament ahead of the Union Budget on February 1, “agriculture and allied activities were the sole bright spot amid the slide in GDP performance of other sectors, clocking a growth rate of 3.4 per cent at constant prices during 2020-21 (first advance estimates)”.

“The three agricultural reform legislation are designed and intended primarily for the benefit of small and marginal farmers which constitute around 85 per cent of the total number of farmers and are the biggest sufferer of the regressive APMC regulated market regime. The newly introduced farm laws herald a new era of market freedom which can go a long way in the improvement of farmer welfare in India,” it said

According to the document, the share of agriculture and allied sectors in Gross Value Added (GVA) of the country at current prices is 17.8 per cent for the year 2019-20.

Exports amounted to approximately Rs 252,000 crore with major destinations being USA, Saudi Arabia, Iran, Nepal and Bangladesh, and major produce exported including marine products, basmati rice, buffalo meat, spices, non-basmati rice, cotton raw, oil meals, sugar, castor oil, and tea. But while India occupies a leading position in the global trade of the aforementioned agri-products, its total agri-export basket accounts for a little over 2.5 per cent of world agri-trade. The survey, while noting agri-related announcements under the Atma Nirbhar Bharat Abhiyan, said “given the large proportion of resource-constrained small and marginal farmers in India, timely availability of adequate credit is fundamental for the success of farming activities.

Fish production reached an all-time high of 14.16 million metric tons during 2019-20. The GVA by the sector to the national economy stood at Rs 2,12,915 crore constituting 1.24 per cent of the total national GVA and 7.28 per cent of the agricultural GVA.

The Food Processing Industries (FPI) sector has been growing at an Average Annual Growth Rate (AAGR) of around 9.99 per cent as compared to around 3.12 per cent in Agriculture and 8.25 per cent in manufacturing at 2011-12 prices.