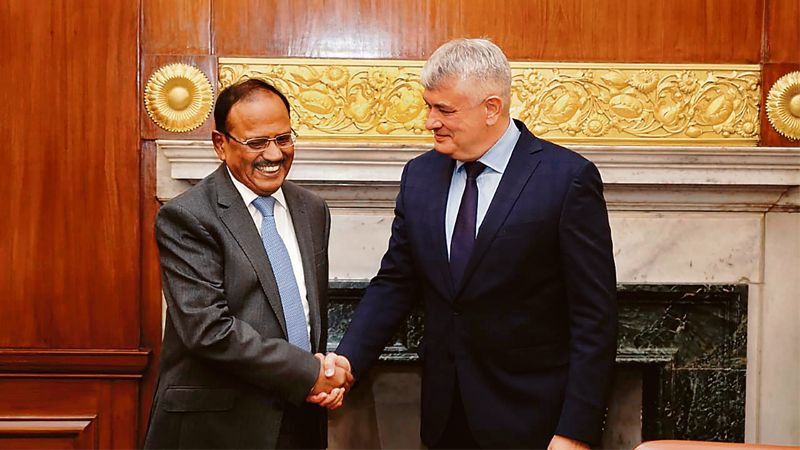 NSA Ajit Doval with his Uzbekistan counterpart Victor Makhmudov at a meeting in New Delhi. PTI

National Security Adviser Ajit Doval on Tuesday met his counterparts from Tajikistan and Uzbekistan on the eve of the first-ever conference of regional NSAs being organised by India to deliberate on the situation in Afghanistan.

The meet, to be attended by eight NSAs, is an attempt to find common ground on five issues on Afghanistan which, if left unattended, will adversely impact all its neighbours. The five problems on which they will try to find common ground are: Terrorism, radicalisation, cross-border movement, drug trafficking and vast amount of military weapons left behind by the western forces. Doval’s meeting with Tajik NSA Nasrullo Mahmudzoda was significant as people of his ethnicity account for over a quarter of the Afghan population. The Tajik majority areas in Afghanistan include the restive Panjshir province whose rebel leaders Amrullah Saleh and Ahmad Masood had tried to put up a fight against the Taliban.

“There was a detailed exchange of views on Afghanistan, with significant convergence of assessments. Concerns were expressed on the sharp increase in terrorist threats. The Tajik side highlighted the gravity of the situation in Afghanistan,’’ sources said about the meeting.

On the bilateral side, discussions took place on deepening cooperation in areas like defence, border management and border infrastructure development. Doval also met the Uzbek NSA Victor Makhmudov to especially discuss the problem of extremism. Uzbeks account for 9% of the Afghan population and anti-Taliban leaders such as Abdul Rashid Dostum and Rasul Pahlawan are from this stock. “Both sides emphasised the need for neighbours to ensure unhindered access of humanitarian assistance to Afghans. They felt that the legitimacy of any Afghan government within Afghanistan was important before the issue of its international recognition,” said the sources.

Pakistan had cried off from the meeting when the idea was initially broached, the Chinese said “scheduling reasons made it inconvenient’’ for its representative to attend the Delhi Regional Security Dialogue.

This means that the dialogue, to be chaired by Doval, will be attended by top security officials of Russia, Iran and all five Central Asian countries — Kazakhstan, Kyrgyzstan, Tajikistan, Turkmenistan and Uzbekistan. All the NSAs are slated to call on Narendra Modi on Wednesday before the meeting that will have simultaneous translation in Russian and Persian.

Meanwhile, new US Special Representative for Afghanistan Tom West will be soon visiting India, Russia and Pakistan to discuss the way forward on Afghanistan.

Tough times made me stronger but needed calm and clarity: Shikhar Dhawan

Scores 79 in the fiest ODI against South Africa