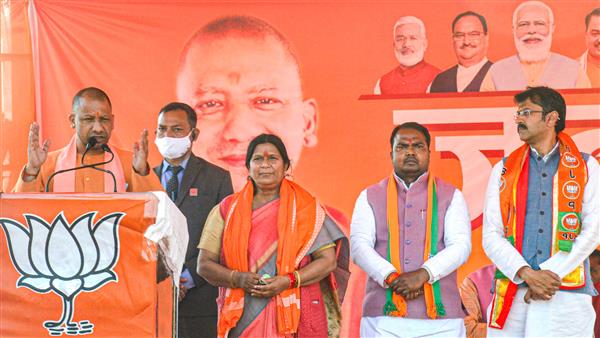 In a scathing attack on the Samajwadi Party, Uttar Pradesh Chief Minister Yogi Adityanath on Tuesday said while the BJP believes in “development for all”, Akhilesh Yadav “cares only about the development of the Saifai family”.

At a public meeting here, Adityanath said, “The Samajwadi Party, Bahujan Samaj Party and the Congress were not there for you during the pandemic. But our government gave free vaccine to everyone and ensured that no one sleeps hungry.” He claimed the law-and-order situation in Uttar Pradesh has improved a lot and there is no place for anarchy in the state.

“Earlier, there was no security. The property of the poor was grabbed. But during our government, mafia and goons were sent to jail and sisters and daughters were protected,” the chief minister said.

“No one is allowed to play with anyone’s faith. Now, instead of being curfew imposed in the state, ‘Kanwad Yatra’ takes place.” He alleged that under the previous government, widow and handicapped pensions used to be looted and distributed among the “samajwadis”. “Now the government is giving pension to one crore elderly and disabled people. Those who played with your life cannot be your well-wisher.” “The BJP believes in ‘Sabka Saath, Sabka Vikas’ whereas the Samajwadi Party chief’s slogan is only the development of the Saifai family,” Adityanath said.

He praised BJP candidate of Kannauj Aseem Arun, a former IPS officer, and urged party ticket holders to win all assembly seats of the district.

Adityanath also spoke about the perfume of Kannauj and said the “socialist perfume has put a bad name of this place” in the world.

In November last year, Akhilesh Yadav has launched a specially made “Samajwadi perfume” hoping to spread the “scent of socialism” in the state.

Kannauj will go to the polls in the third phase on February 20.