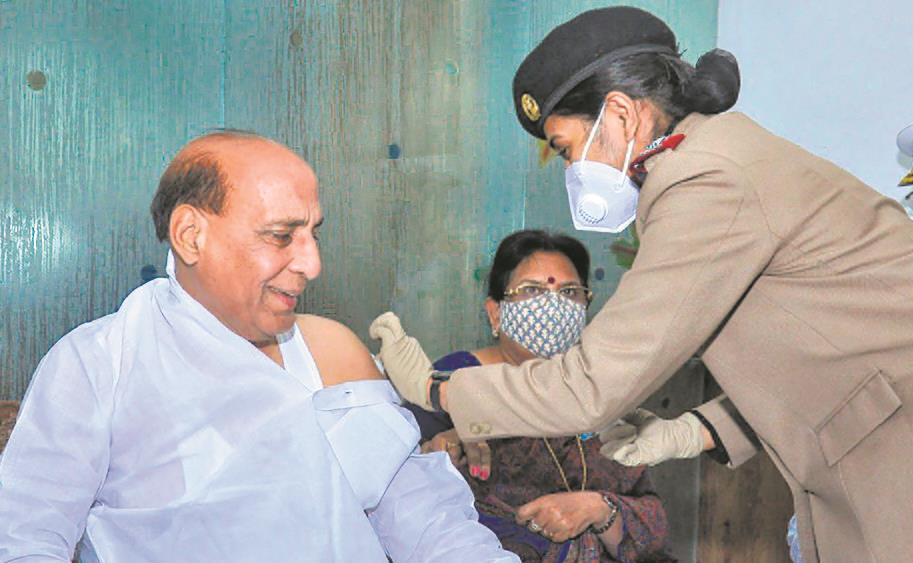 Defence Minister Rajnath Singh being given a vaccine shot in New Delhi on Tuesday. Health Minister Harsh Vardhan and former J&K CM Farooq Abdullah were prominent among those vaccinated. PTI

The government on Tuesday said all private hospitals with adequate inoculation arrangements can administer Covid jabs in the ongoing phase 2 of the vaccination drive. So far, private hospitals empanelled under PM Jan Arogya Yojana and Central Government Health Schemes were permitted to give vaccines.

54 students of Sainik School, Kunjpura, tested positive on Tuesday, forcing the authorities to declare the school premises a containment zone.

The Gyuto Tantric Monastery in Himachal’s Dharamsala has become a Covid hotspot with 154 out of 330 monks having tested positive for the virus. 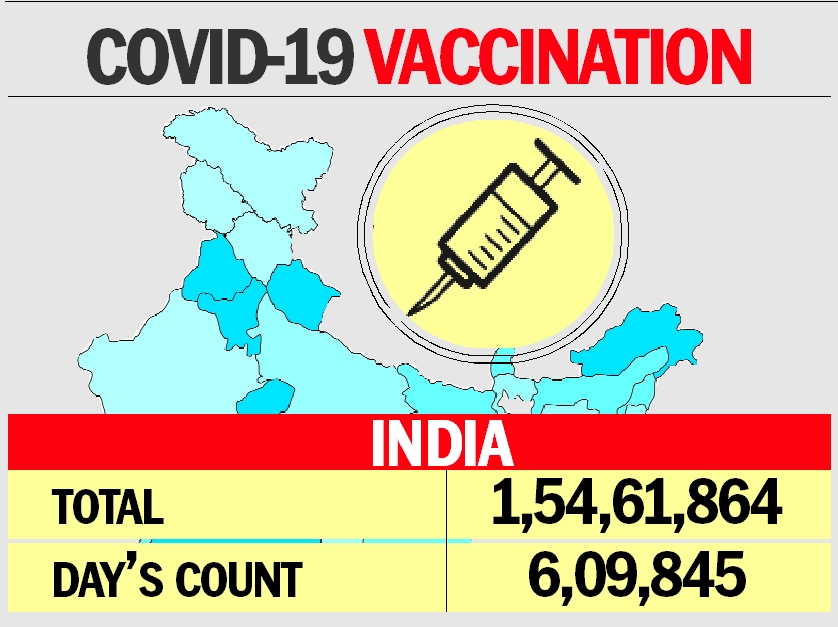 After a review meeting with states, the Health Ministry said: “Private hospitals not empanelled under the select categories have been permitted to operate as Covid vaccination centres if they have adequate vaccinators, space, cold chain facilities and arrangement for management of adverse events.”

Earlier, the government said glitches in the software for the phase 2 of the vaccination drive stood resolved with jab registrations soaring to 50 lakh till 12 noon on Tuesday. This works out to nearly two lakh registrations per hour with the government aiming to further scale up the drive and cover as many beneficiaries among 60 plus and 45-59 years (with comorbidities) as possible.

Health Minister Harsh Vardhan, Defence Minister Rajnath Singh and National Conference chief Farooq Abdullah took the first dose. Vardhan and his wife paid for the shots. RS Sharma, chairman of the empowered group for vaccination, said: “As we scale up the drive, we want the data to be safe. There are possibilities of cyber attacks. We are watchful. We have not collected sensitive data barring a few demographic details.”

The government urged beneficiaries to use only Co-WIN portal (cowin.gov.in) and  Arogya Setu for registration. Sharma said people faced glitches yesterday because they took to Co-WIN app, which was not meant for registration.

“There are no glitches now. We got 50 lakh registrations. One mobile phone can register four persons,” said Sharma, adding that Co-WIN portal allowed people to cancel and reschedule appointments. The Health Ministry today allowed private hospitals to schedule vaccinations whenever they want, doing away with 9 am to 5 pm limit for sessions. Health Secretary Rajesh Bhushan said daily cases had witnessed a marginal rise in the past two weeks in Chhattisgarh, Madhya Pradesh, Gujarat, Karnataka, Punjab, Tamil Nadu, Haryana, Kerala, and Maharashtra. “Punjab is seeing a marked and steady rise since February 1,” said Bhushan as India’s active caseload reached 1,68,358. VK Paul, Member, Health, NITI Aayog, said most high burden states had attributed virus surge to the wedding and poll seasons.

Meanwhile, the Philippines is gearing up to sign a deal for 30 million Covovax doses, a candidate of Serum Institute. Indian Ambassador to the Philippines Shambhu Kumaran said: “Confident that both Covovax and Covaxin will happen. A Philippines team is visiting India next week to finalise the deal. On Covaxin, a strong engagement is underway with the FDA.”