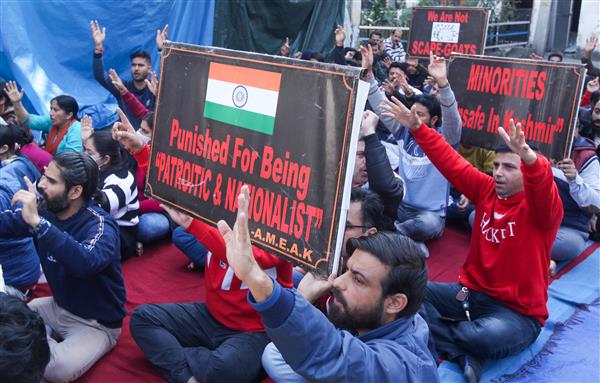 Ambassador of Israel Naor Gilon has sought to calm the social media storm that has erupted in India after an Israeli filmmaker Nadav Lapid criticised Vivek Agnihotri’s film “The Kashmir Files” as “propaganda”.

“As a human being I feel ashamed and want to apologise to our hosts for the bad manner in which we repaid them for their generosity and friendship,” said an open letter to Lapid posted by Gilon, who regretted that the filmmaker had walked away after making the comments, leaving the diplomats to face hate mail.

Criticising Lapid, the Ambassador wrote: “You will go back to Israel thinking that you are bold and made a statement. We, the representatives of Israel, would stay here. You should see our DM (direct message) boxes following your “bravery” and what implications it may have on the team under my responsibility.” The envoy also spoke against India social media users, who in retaliation have started doubting the Holocaust. “As a son of a holocaust survivor, I was extremely hurt to see reactions in India to you that are doubting “Schindler’s List”, the Holocaust and worse. I unequivocally condemn such statements. There is no justification. It does show the sensitivity of the Kashmir issue here.

“The friendship between the people and the states of India and Israel is very strong and will survive the damage you have inflicted,” he added.

In a rather controversial end to the 53rd International Film Festival of India (IFFI) at Goa on Monday evening, jury head Lapid had said: “We were disturbed and shocked by the 15th film, “The Kashmir Files”. To us, it felt like propaganda, a vulgar movie, inappropriate for an artistic competitive section of such a prestigious film festival.”

Speaking in front of several Union Ministers and Goa Chief Minister Pramod Sawant at the closing ceremony, Lapid said he felt comfortable sharing his feelings on stage, adding that “the spirit of having a festival is to accept a critical discussion which is essential for art and life”.

The Ambassador said Lapid should have been more humble when India was consuming Israeli content such as the TV series Fauda.

“I’m no film expert but I do know that it’s insensitive and presumptuous to speak about historical events before deeply studying them and which are an open wound in India because many of the involved are still around and still paying a price,” he observed.

Accusing Lapid of being an inveterate contrarian, the Ambassador suggested that he could criticise Israel as much as he wanted but there was no need to reflect “your frustration” on other countries. “I’m not sure that you have enough factual basis to make such comparisons. I know I don’t,” Gilon wrote.

While Israeli diplomats scrambled to contain the social media fire, the main protagonists behind “The Kashmir Files” spoke out against the trashing of the film by Lapid. “We’ll give a proper reply. If the Holocaust is right, exodus of Kashmiri Pandits is right too. It seems pre-planned, as immediately after that the toolkit gang became active. Shameful for him to make a statement like this,” said Anupam Kher who featured prominently in the film.

“Truth doesn’t get impacted by such things. One person or 10 people don’t impact the whole country. Pain brings people together. I got messages from Israel and they said wonderful things,” he added.

“For me, this (‘propaganda’ comment) is not new, as many terrorist organisations, urban Naxals and those who want to divide India say so. I’m surprised that such a narrative was supported on a stage at an event by the Government of India,” said the film’s director Vivek Agnihotri.

“Who are these people who always stand against India?...I challenge all intellectuals of the world to prove if any scene, dialogue or event shown in the film is false... then I will quit film-making,” he added.

While Information Minister Anurag Thakur retweeted the Israeli Ambassador’s open letter to the filmmaker, Goa CM Pramod Sawant, who was present at the ceremony, condemned the comments.

In Indian culture they say a guest is like God. You (Lapid) have abused the Indian invitation to chair the IFFI panel of judges as well as the trust they bestowed on you. — Naor Gilon, Ambassador of Israel