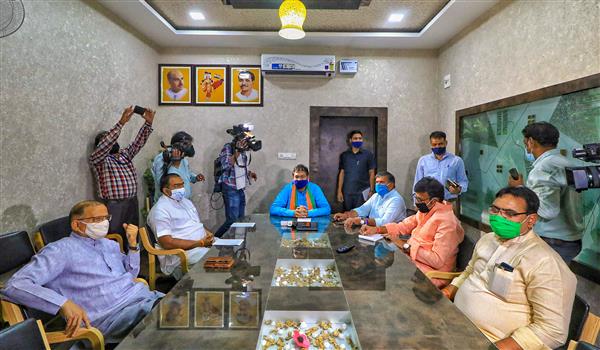 “Another recognised Congress leader insulted. Sachin should immediately join BJP in national interest. Another example of Rahul Gandhi’s arrogance and lack of leadership,” said Joshi, BJP’s Prayagraj MP who dumped the Congress in favaour of the saffron party in 2016.

In the past couple of years several senior Congress leaders have switched sides, most recent being Jyotiraditya Scindia whose exit from the grand old party in March resulted in the fall of the Kamal Nath government and return of the BJP in Madhya Pradesh.

Whether Rajasthan is headed the same way as MP and before that Karnataka remains to be seen but political observers say indications are all there. “The BJP is a fierce adversary and is unlikely to let go of the golden opportunity,” they say.

While central leaders are holding meetings and are also in touch with “rebels”, sources say the BJP’s Rajasthan unit also held a meeting to strategise and discuss possibilities emerging out of today’s developments in the Congress. Rajasthan BJP chief Satish Poonia said the party will be happy if Pilot joins the party but final decision was with the central leadership.

The BJP says the Gehlot government is now in a minority and will fall soon. “We are not demanding a floor test but they have lost the confidence of the people and should step down themselves,” Poonia was quoted as saying in reference to Pilot’s claim that he has the support of 30 MLAs.

A lot also depends upon how many Congress MLAs stand in support of Pilot.

Reacting to the replay of the MP political drama in Rajasthan and earlier Karnataka, Scindia had said: “Sad to see my erstwhile colleague, @SachinPilot too, being sidelined and persecuted by Rajasthan CM, @ashokgehlot51. Shows that talent and capability find little credence in the @INCIndia.”