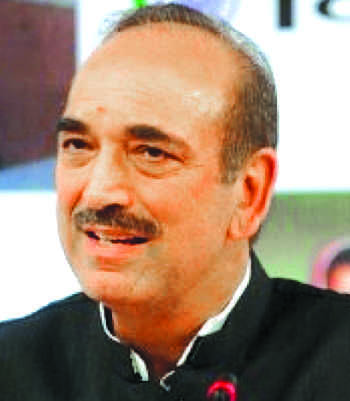 In growing signs of rift within the Congress, party veteran and ace dissenter Ghulam Nabi Azad on Sunday publicly praised Prime Minister Narendra Modi, saying the PM is a rooted man, one who has not forgotten his roots.

Addressing a gathering of Gujjar community in Jammu, Azad said, “I like many things about many leaders. I am also from a village. Many tall leaders are proud of their humble beginnings like our Prime Minister who also says he is from a village and has washed utensils and sold tea. We have political differences with the Prime Minister but at least he does not hide his true self.”

Azad while praising the PM for being rooted said people who hide their realities were living in a make believe world.

“The moment you hide your reality, you are living in a bubble. A person should be proud of his roots. I have travelled the world, lived in five stars but when I sit with villagers, I sense an earthy fragrance which is refreshing,” said the former Leader of Opposition in Rajya Sabha without naming anyone.

Praising the PM in one breath, Azad also flagged lack of finances for the development of Jammu and Kashmir and said there was an urgent need to fix the economy of the UT after the abrogation of Article 370 and the bifurcation of the erstwhile state into two UTs.

“Development works in J&K must be enhanced. Central funding must be raised by three to four times. The development work claimed to have been done is not visible in J&K and the industry is closed. Revival is urgent,” said Azad who had received a tearful farewell from PM Modi in mid-February.

While it remains to be seen if the rebellion by some senior Congress leaders would lead to a formal split in the party, it’s instantly clear that dissenters are attempting a new idiom to articulate their opposition of the BJP — one that is not rabidly anti-Modi.