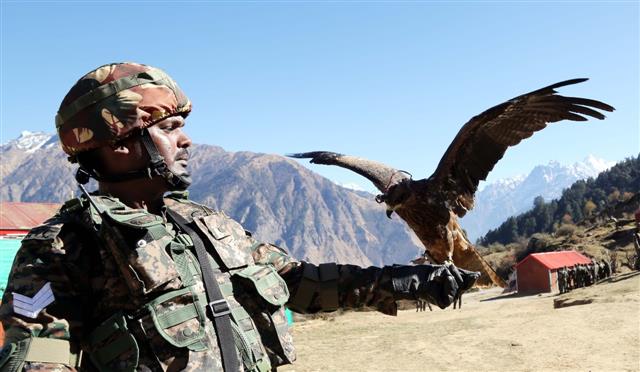 This kite has been trained to bring down drones.

Facing threat of drones from across the Himalayas, the Indian Army has trained kites and dogs who work as a team to prey on enemy drones.

The use of two trained animals was demonstrated during the ongoing exercise “Yudh Abhyas” between India and the US.

The Army created a situation to test a trained kite and a dog. The dog used its sensory skills to identify the location of a drone and, subsequently, the kite was launched to bring it down.

Though multiple automated drone-kill options are being tried out, the kite-dog combination has the capability to tackle the menace of drones coming from across the border into Punjab and Jammu and Kashmir.

Several cases have been reported where drones coming from Pakistani side have dropped consignments of drugs, guns and money in J&K and Punjab.

The 18th edition of the India-US joint training exercise “Yudh Abhyas” commenced at Auli, Uttarakhand, two weeks ago. The scope of the exercise involves exchanges and practices on a wide spectrum of combat skills, including combat engineering and employment of counter-UAV techniques.

The exercise is conducted annually between India and US with the aim of exchanging best practices, tactics, techniques and procedures between the armies of the two nations. The previous edition of the exercise was conducted at Joint Base Elmendorf Richardson, Alaska, US, in October 2021.

US Army soldiers of 2nd Brigade of the 11th Airborne Division and Indian Army soldiers from the Assam Regiment are participating in the exercise.