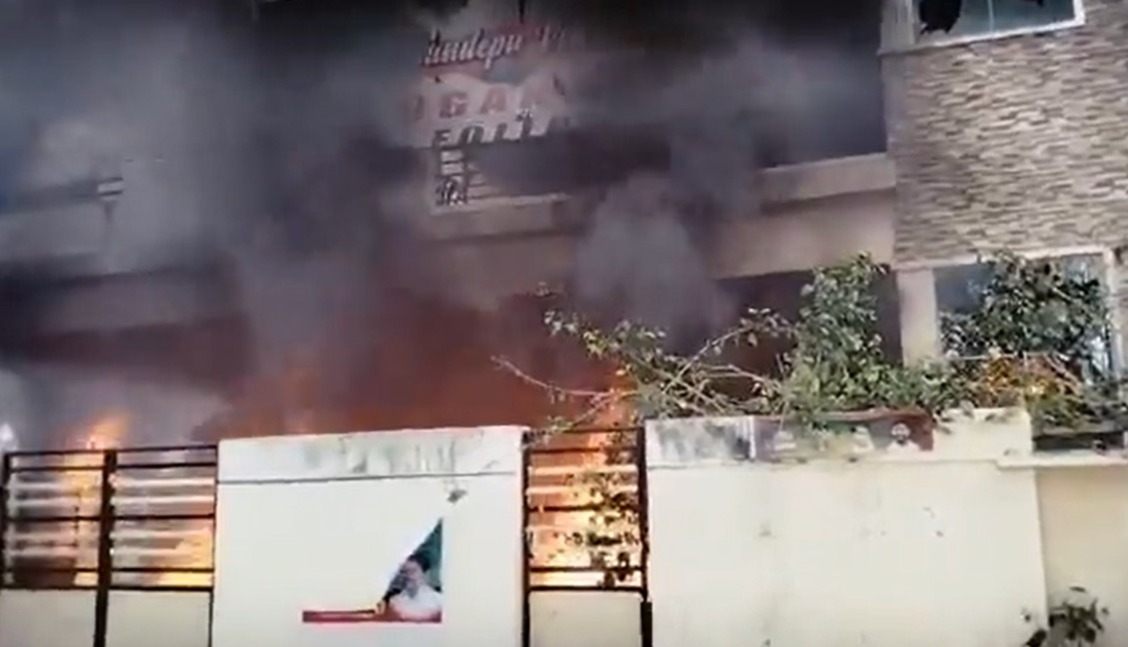 State Home Minister Taneti Vanitha said some 20 police personnel were injured in stone pelting by the mob while the protestors torched a school bus. video grab

Arson broke out in Amalapuram town in Andhra Pradesh on Tuesday when police resorted to lathi-charge at people who staged a protest against the proposed renaming of the newly-created Konaseema district as B R Ambedkar Konaseema district, with a number of police personnel left injured and the protesters opposed to the name change allegedly setting the houses of state minister P Viswarupu and a ruling YSR Congress MLA P Satish on fire.

While the ruling party blamed unnamed forces behind the arson, all opposition parties hit out at the Jagan Mohan Reddy government over its “gross failure” in controlling the situation.

The opposition parties appealed to people to observe restraint and ensure peace returned to Konaseema.

State Home Minister Taneti Vanitha said some 20 police personnel were injured in stone pelting by the mob while the protestors torched a school bus.

Prohibitory orders under Section 144 CrPC were clamped in Amalapuram even as additional police forces were rushed in to bring the situation under control.

Eluru Range Deputy Inspector General of Police G Pala Raju, who rushed to Amalapuram, said they were observing restraint and trying to bring the situation under control. He said the injured police personnel were “not in danger”.

Trouble started when the police allegedly prevented leaders of the Konaseema Sadhana Samiti from going into the district Collector’s office for submitting a memorandum against renaming the district and resorted to a lathi-charge.

As police tried to chase the Samiti leaders and workers away, stone pelting ensued. As trouble broke out, shops in the town downed their shutters even as the protesters allegedly went berserk and first set a school bus on fire.

They later went to the house of Transport Minister Viswarupu and torched it. Sensing trouble, police had by then moved the family members of the ministers out to safety.

“It was such a horrifying thing when a mob of 1,000-1,500 persons came and burnt our house. They were carrying petrol in bottles, which clearly indicated that they did all this intentionally,” Satish said.

He and his family members were, however, moved to safety.

The state Home Minister Vanitha told reporters at the Secretariat here that some parties and anti-social elements apparently instigated the arson.

“It is unfortunate that over 20 police personnel sustained injuries in the incident. We will conduct a thorough investigation into the incident and bring the culprits to book,” she added.

Principal opposition Telugu Desam Party, BJP, Jana Sena and the Congress hit out at the government over its gross failure in controlling the Amalapuram situation.

“The arson in Konaseema, known for its peace, is unfortunate. The Home Minister made baseless allegations on a delicate issue. This is completely a failure of the government and the police,” Telugu Desam chief N Chandrababu Naidu said in a statement.

Jana Sena chief K Pawan Kalyan lashed out at the Home Minister for blaming the opposition parties over the Amalapuram incidents.

“It is nothing but an effort to cover up the government’s failure in maintaining law and order. The ruling party is only seeking to push the blame on to the opposition to cover its failures,” Kalyan said.

“The government should take responsibility for its failure to maintain peace in Konaseema,” he added.

State Congress president Sake Sailajanath too blamed the government over this.

“Instead of blaming I can say it is failure of police. (When I was) DGP of combined AP, such incidents were never allowed to boomerang on this scale,” Dinesh Reddy said in a social media post.

He recalled that he worked as SP of the erstwhile East Godavari district for a long period and people of Konaseema were found to be peace-loving. “I am shocked at the turn of events,” he added.

On April 4, the new Konaseema district was carved out of the erstwhile East Godavari.

Last week, the state government issued a preliminary notification seeking to rename Konaseema as B R Ambedkar Konaseema district and invited objections, if any, from the people.

Viswarupu said the proposal to rename the new district was based on the demand raised by all political parties.

In this backdrop, the Konaseema Sadhana Samiti objected to the proposed renaming of the district and wanted the name Konaseema retained.

The Samiti organised a protest on Tuesday and sought to submit a memorandum to the district Collector Himanshu Shukla against the renaming.

Police tried to foil the protest, which apparently infuriated the protesters and eventually all hell broke loose in the otherwise quiet town.