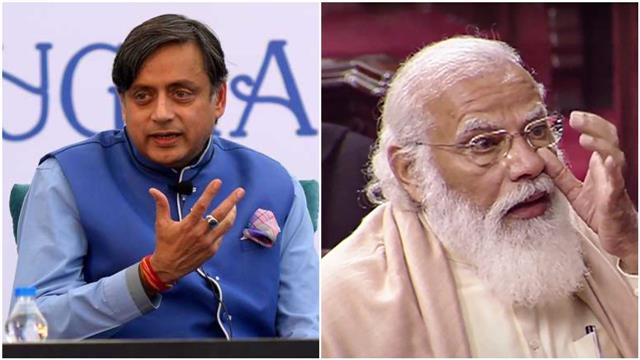 Participating in a discussion on former Vice President Hamid Ansari’s autobiography published by Rupa, Tharoor commented on Prime Minister’s emotional breakdown in the Rajya Sabha saying “it was a very artfully crafted performance. It was partly in response to Rakesh Tikat’s tears that the Prime Minister decided he also has tears”.

Tharoor’s response came on moderator Rajdeep Sardesai’s pointed question to whether he was actually calling the Prime Minister’s breakdown in the Rajya Sabha the other day a “performance”.

“Yes,” insisted Tharoor, who, along with Sardesai, just got protection from arrest from the Supreme Court in a UP police FIR which had booked them both for criminal conspiracy and sedition over the Republic Day incidents.

Both Sardesai and Tharoor had tweeted inaccurate details on the death of a farmer during the January 26 violence in New Delhi.

Tharoor, on Wednesday, said politics in recent years “has narrowed the space for a Hamid Ansari kind of figure in Indian public life”.

The discussion also saw former MP Pavan Verma ask former vice president Hamid Ansari and other panelists as to why the Khilafat movement for the establishment of a Caliphate needed to be backed at a time of Indian freedom movement, and also why the government did not touch personal laws of communities other than the Hindus after Independence.

Verma posed another pointed query to Ansari: “Why did a secular Congress government overturn a modern Shah Bano judgment?”

On the Shah Bano issue, Ansari said: “Politicians take decisions and you can examine them in hindsight.”

On Muslim law not being touched, Ansari seemed to disagree and said: “Every personal law was touched to the extent it suited political convenience.”

“Jinnah, in fact, used to sneer at the Khilafat movement,” said Tharoor.

The panelists had gathered to discuss Ansari’s recent autobiography “By Many a Happy Accident: Recollections of a life”.