As Delhi's air turns 'severe', ban imposed on plying of diesel LMVs, entry of trucks into capital : The Tribune India

Air quality panel says state government may take a call on the closure of educational institutions, non-emergency commercial activities and plying of vehicles on odd-even basis 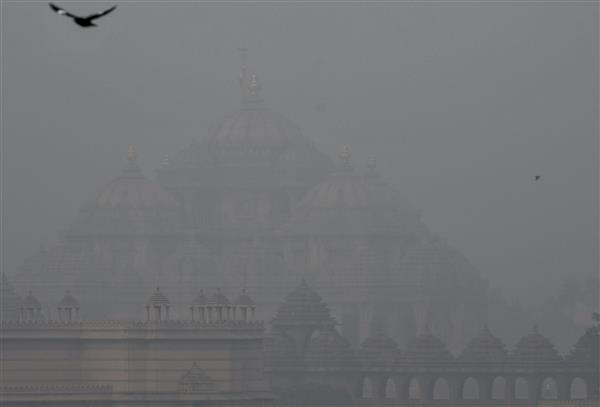 Akshardham Temple shrouded in a thick layer of smog, in New Delhi, on Thursday, November 3, 2022. PTI

With Delhi’s air quality index (AQI) a notch short of entering the “severe plus” category, a central panel on Thursday directed authorities to ban the plying of four-wheeled diesel light motor vehicles in Delhi and adjoining NCR districts and the entry of trucks into the capital as part of anti-pollution measures under the final stage of the Graded Response Action Plan.

However, BS-VI vehicles and those used for essential and emergency services are exempted, according to an order issued by the Commission for Air Quality Management (CAQM).

The order stated that the state government may take a call on the closure of educational institutions, non-emergency commercial activities and plying of vehicles on odd-even basis.

Central and state governments may decide on permitting work from home.

“Ban on plying of 4-wheeler diesel LMVs in NCT of Delhi and Districts of NCR bordering Delhi, except BS-VI vehicles and vehicles used for essential/emergency services,” the order read.

The CAQM also ordered a ban on Delhi-registered diesel-run medium and heavy goods vehicles in the capital. Those carrying essential commodities and providing essential services are exempted.

The entry of trucks other than electric and CNG ones in Delhi is banned too. Those carrying essential commodities are exempted.

The CAQM also directed closure of all industries running on non-clean flues in the region, “even in areas which do not have PNG infrastructure and supply”.

An AQI of above 400 is considered “severe” and can affect healthy people and seriously impact those with existing illnesses.

According to the Energy Policy Institute at the University of Chicago’s (EPIC) Air Quality Life Index (AQLI) released in June, the residents of Delhi stand to lose 10 years of life expectancy due to poor air quality.

With the pollution levels worsening, the CAQM had directed authorities on Saturday to impose a ban on construction and demolition activities in Delhi-NCR, barring essential projects, and other curbs under the third stage of the GRAP.

First implemented in 2017, the GRAP is a set of anti-air pollution measures followed in the capital and its vicinity according to the severity of the situation.

This year, curbs on polluting activities are being imposed three days in advance, based on forecasts.

Earlier, the authorities would implement the measures only after the PM2.5 and PM10 concentration touched a particular threshold.