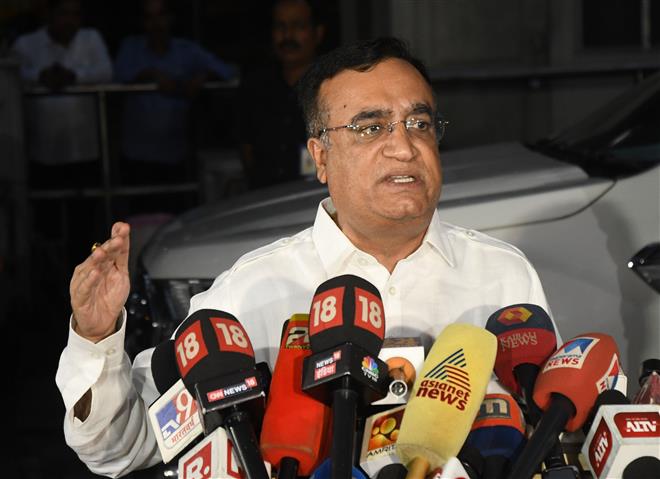 The Congress on Monday plunged into deeper crisis in Rajasthan with pro-Ashok Gehlot MLAs setting three conditions for the high command for leadership change in the state.

The top brass is mulling action against some ministers for holding an informal MLAs’ meeting in Jaipur on Sunday while the formal legislature party was cancelled in an embarrassment to the party.

Firm on opposing Sachin Pilot “at all costs”, the MLAs’ other two conditions were that they would meet the AICC observers in groups and not one-on-one, and a new CM, if at all, should be elected from among the 102 MLAs who backed the party in July 2020 when Pilot rebelled. With the Gehlot camp flexing muscles, the ball is in the court of Congress president Sonia Gandhi, who was briefed on the lawmakers’ demands by AICC observers Mallikarjun Kharge and Ajay Maken this evening and has sought a written report. The duo flagged the conditions as “unprecedented in Congress history”, and said a parallel MLAs’ meet yesterday by the Gehlot loyalists constituted “prima facie indiscipline”.

Sonia, said to be “upset with Gehlot”, is expected to take a call on the matter by Tuesday with the Congress working to save its face and the government in Rajasthan, one of the only two states it rules on its own apart from Chhattisgarh. Gehlot’s “regret and the defence that the MLAs didn’t listen to him” haven’t cut ice with Sonia, sources said.

The developments put a question mark on Gehlot’s consensus candidate image for the forthcoming Congress presidential election as names of other potential contenders — Kharge, Mukul Wasnik, Digvijay Singh and Kamal Nath — emerged today. Singh and Nath have, however, publicly said they are not interested in the post.

After meeting Sonia today, Maken said, “It is very unfortunate that the CLP meeting could not take place yesterday. Its venue and time was fixed in consultation with the CM. A parallel meet is prima facie indiscipline. As the MLAs want the Congress chief to take a call on Rajasthan only after October 19, we told them there could be no greater conflict of interest than this as the CM (in case he contested and won the party chief’s poll) would be literally empowering himself to take the Rajasthan decision.”

Earlier today, three Rajasthan ministers Shanti Dhariwal, Pratap Singh Kachariyawas and Mahesh Joshi met Maken and Kharge to speak on behalf of the revolting MLAs and put their three conditions. The MLAs did not meet Kharge and Maken who returned to Delhi empty-handed in an embarrassment to the high command.