No votes had been polled on the machine, says government release 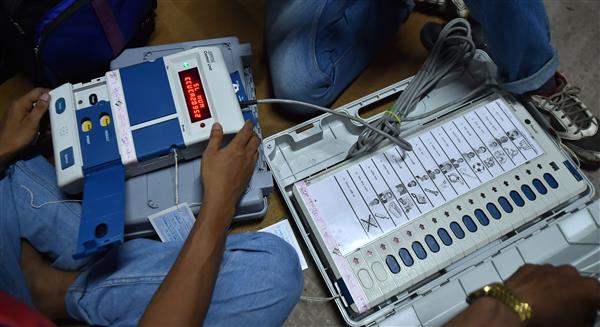 An unused EVM was found inside a trunk on the counting centre premises here on Saturday evening, a government release said.

On being found, District Election Officer Megh Nidhi Dahal along with Returning Officers rushed to the spot to enquire about the machine. Contesting candidates too reached the spot.

On investigation, it was found that the unused EVM which had been kept in reserve on polling day, had inadvertently found its way to the counting venue. The release said no votes had been polled on the machine.

It was opened before contesting candidates who were satisfied that there was no misuse the unused EVM was immediately taken for safe storage to an EVM warehouse adjacent to the Deputy Commissioner’s office.

“The reserved EVM was found in one of the trunks which had been brought to the counting centre for keeping the polled EVMs,” Dahal was quoted in the release.

“The contesting candidates were satisfied that the EVM was a reserved EVM and no votes were polled therein. The machine was later taken to the EVM warehouse and kept in safe custody”, he added.

Counting of votes polled in the three-phase Assam Assembly elections is going on in 143 counting halls across the state to decide the fate of 946 contestants for the 126- member House.  PTI