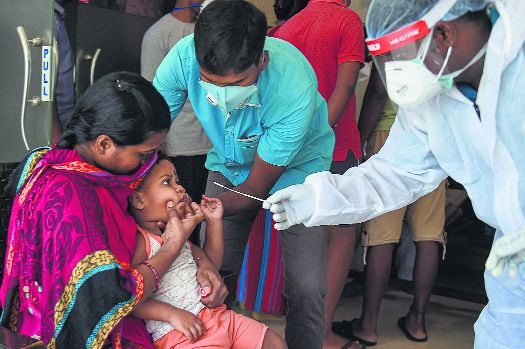 A medic collects a swab sample of a child at an isolation centre for railway passengers arriving in Chennai. PTI

India today surpassed Italy as the sixth most Covid-affected nation in the world with the disease load touching 2,36,657 cases amid a record daily surge of 9,887 cases.

From the start of the lockdown on March 25 until today, India has come from 606 cumulative cases to 2.36 lakh, registering a whopping 390 times rise in the number of infections. As many as 1,14,072 patients have recovered so far. The stable recovery rate of around 48 per cent is holding with total fatalities reaching 6,642 amid concerns that health facilities may be under-reporting deaths.

The Health Ministry, however, rejected reports that deaths from Covid-19 were being read down with Joint Secretary Lav Agarwal saying, “The under-reporting of Covid deaths is in the interest of the state governments because there are specific and separate guidelines to handle the bodies of patients.”

Meanwhile, Congress leader Rahul Gandhi took a jibe at the Centre for unlocking the country when cases were peaking. He shared disease graphs of Spain and Germany to show how both countries, originally heavily affected by the infection, relaxed restrictions when the cases began dropping. “This is what a failed lockdown looks like,” Gandhi tweeted, pointing to the Covid graph of India, which has been rising since April-end with top experts predicting a peak by July.

Gandhi also called the NDA-2 as “Demon-2” saying, “The government is actively destroying our economy by refusing to give cash support to people and MSMEs. This is Demon 2.0.”