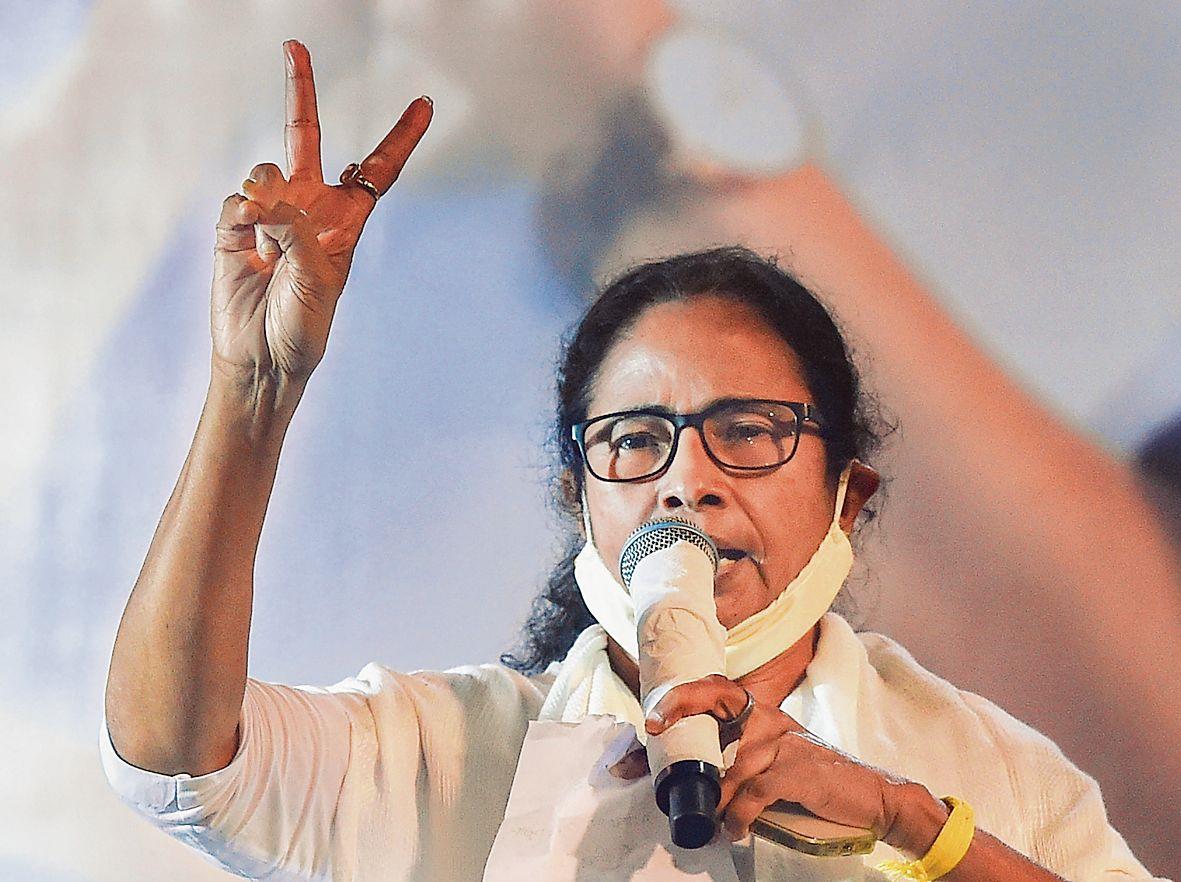 Chief Minister Mamata Banerjee on Sunday led the Trinamool Congress to a stunning third consecutive win in West Bengal while the Left Democratic Front scripted history in Kerala. The DMK wrested Tamil Nadu after 10 years and the BJP-led alliance retained Assam while expanding southward to Puducherry.

The Congress and the Left stood wiped out in Bengal with the TMC walking away with the cream and the BJP posting massive gains with 76 leads (a gain of 73 seats over 2016), dislodging Congress as the principal opposition in the outgoing Assembly.

Read also: The woman in white

Though the voters re-elected the sitting governments in three states, including Assam and Kerala, Mamata’s Bengal win stood out for its scale considering she not only firmly staved off the BJP challenge but also appeared set to better her 2016 tally of 209 seats.

Mamata, however, lost her seat Nandigram to former aide Suvendu Adhikari, declared elected by a slim margin of 1,622 votes — a result for which the TMC demanded a recount.

“Bengal saved India. This is the victory of Bengal, of India and of democracy,” a beaming Mamata said to cheering crowds even as she urged them to follow the Covid protocol. Positioning herself as the new pole of opposition unity and a harbinger of a federal front minus the Congress, Mamata went on to demand electoral reforms.

In Kerala, CM Pinarayi Vijayan led the LDF to the best-ever electoral performance since Independence and in the history of the state Assembly. Not only did the LDF become the first sitting government to return to power since 1977, it also logged the maximum seats. The EC gave the LDF 97 leads (a gain of seven seats from the last election) – much above the halfway mark of 71 in the Assembly.

The UDF lagged behind at 41 leads, despite an aggressive campaign by former Congress chief Rahul Gandhi, an MP from Wayanad. The Congress, which had hoped to consolidate its 2019 Lok Sabha gains in Kerala, failed to make any mark, with insiders already questioning Rahul’s poll strategy.

In Assam too, a weak Congress-led alliance with the AIUDF was no match to CM Sarbananda Sonowal-led BJP, which became the first non-Congress government to retain power in the state history.

In Assam, the BJP-led alliance had posted strong leads on 75 seats by 9 pm while the Congress alliance was trailing behind at 49, losing two seats from the last election results.

The sole ray of hope for the Congress came from Tamil Nadu, where it ended up a small player behind the winning regional party DMK, with MK Stalin all set to be the next CM. The Congress was leading in only 16 of the 25 seats it fought in Tamil Nadu while the DMK was much ahead with 133 leads in the 234-member Assembly where the half way mark is 118.

The incumbent AIADMK led by E Palaniswami also posted a significant performance after exit polls had written off the party with the outgoing CM consolidating his position within the AIADMK as the successor of the late J. Jayalalithaa.

Addressing mediapersons at her Kalighat home in Kolkata in the evening, Mamata said her oath-taking would be a small affair.

The NDA alliance consisting of the All India NR Congress and the BJP along with supporting Independents went past the majority mark of 16 seats in the 30-member Puducherry Assembly as per EC trends on Sunday night.

Prime Minister Narendra Modi on Sunday congratulated West Bengal Chief Minister Mamata Banerjee on her party’s win in the Assembly polls and assured the Centre’s all possible support to the state government to fulfil people’s aspirations and also to fight the pandemic. In a series of tweets, Modi also offered congratulations to Kerala Chief Minister Pinarayi Vijayan and DMK supremo MK Stalin for their poll victories. PTI