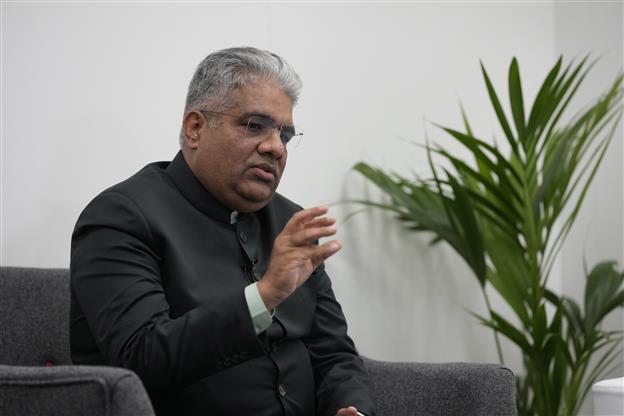 Environment Minister Bhupender Yadav called the COP26 summit a “success” from India’s standpoint, terming as “troublesome” the “lack of commitment on climate finance” by developed nations.

Consensus remained elusive, but India “articulated and put across the concerns and ideas of the developing world quite succinctly and unequivocally”, he said.

“The summit proved to be a success from India’s standpoint because we articulated and put across the concerns and ideas of the developing world quite succinctly and unequivocally. India presented the way for a constructive debate and equitable and just solutions at the forum,” he said.

Yadav, while noting India’s efforts, including on solar energy, said there has been a lot of talk about and around Nationally Determined Contributions (NDC), “the lack of commitment on climate finance is troublesome”.

At the plenary earlier, instead of agreeing to “phase-out” of coal power in the final text, Yadav read out a new version of the paragraph that used “phase-down”, ensuring a last-minute change of language on fossil fuel in the Glasgow Climate Pact at the 26th session of the Conference of the Parties (COP26) to the United Nations Framework Convention on Climate Change (UNFCCC) that concluded last night.

“India has maintained that the current climate crisis has been precipitated by unsustainable lifestyles and wasteful consumption patterns mainly in the developed countries. The world needs to awaken to this reality,” he said.

Speaking of the “new mantra for sustainable development” given by Prime Minister Narendra Modi at the climate summit, Yadav said ‘LIFE’ (Lifestyle for Environment) can be the foundation for the same.

“When facing challenges of a planetary scale, such as climate change, the message of ‘vasudhaivkutumbakam’ or the ‘world as one family’ needs to be amplified more than ever. India’s message to the world is that it needs to shift towards lifestyles that value moderation over excess,” he said.

India’s goals include non-fossil energy capacity to reach 500 GW by 2030 and meeting 50 per cent of its energy requirements with renewable energy by the year India will reduce its total projected carbon emissions by one billion tonnes from now and reduce the carbon intensity of its economy to less than 45 per cent by 2030. By 2070, India will achieve the target of net zero emissions.