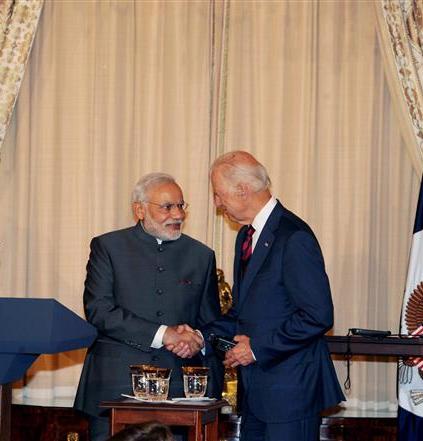 US President Joe Biden and Prime Minister Narendra Modi are committed to defeating the Covid, rebuilding the global economy, jointly combating the scourge of global terrorism and promoting a free and open Indo-Pacific, setting up an ambitious agenda to take the strategic bilateral ties to the next level.

The two leaders, during their first phone call on Monday after Biden was sworn in as the US President, agreed to continue close cooperation to promote a free and open Indo-Pacific, including support for freedom of navigation, territorial integrity and a stronger regional architecture through the Quad, the White House said.

Biden and Modi committed that the US and India would work closely together to win the fight against the Covid pandemic, renew their partnership on climate change, rebuild the global economy in a way that benefits the people of both countries, and stand together against the scourge of global terrorism, the White House said in a readout of the call.

Spoke to @POTUS @JoeBiden and conveyed my best wishes for his success. We discussed regional issues and our shared priorities. We also agreed to further our co-operation against climate change.

After being sworn in as President on January 20, Biden has so far had phone calls with nine foreign leaders. Traditionally, the new American President makes first phone calls to the leaders of two neighbouring countries — Canada and Mexico.

Thereafter, Biden called leaders of close US allies, including Britain, France, Germany, South Korea and Australia. In between, he called Russian President Vladimir Putin, which was necessitated due to the extension of the New Start Treaty for another five years.

Modi is the first foreign leader whom Biden has spoken with beyond neighbours and key NATO allies, reflecting the significance his administration attaches to ties with India.

President @JoeBiden and I are committed to a rules-based international order. We look forward to consolidating our strategic partnership to further peace and security in the Indo-Pacific region and beyond. @POTUS

“The President underscored his desire to defend democratic institutions and norms around the world and noted that a shared commitment to democratic values is the bedrock for the US-India relationship,” the White House said, adding the two leaders resolved that the rule of law and the democratic process must be upheld in Myanmar.

The reference to promote a free and open Indo-Pacific, including support for freedom of navigation, territorial integrity, is a clear reference to China’s aggressive actions in the region.

China claims almost all of the 1.3 million square mile South China Sea as its sovereign territory. It has been building military bases on artificial islands in the region also claimed by Brunei, Malaysia, the Philippines, Taiwan and Vietnam.

China has impeded commercial activity such as fishing or mineral exploration by countries namely Vietnam and the Philippines.

Biden and Modi agreed to stay in close touch on a range of global challenges and look forward to what the United States and India would achieve together for their people and for their nations, the White House said.

In a tweet, Modi said he conveyed his best wishes to the US President and they discussed regional issues, as well as shared priorities.

“We also agreed to further our cooperation against climate change,” he said.

“President Biden & I are committed to a rules-based order. We look forward to consolidating our strategic partnership to further peace & security in Indo-Pacific region and beyond,” Modi said in another tweet.

The two leaders had a very warm and wide-ranging conversation, India’s Ambassador to the US, Taranjit Singh Sandhu, told PTI after the phone call between the two leaders.

“We have an ambitious agenda for cooperation and you will see active engagement in the days ahead. Based on our shared values and common strategic interests, we are committed to advancing India-US Strategic Partnership and closely working together with like-minded countries in meeting regional and global challenges — COVID-19 pandemic, economic recovery, clean energy and climate change, fight against terrorism, cooperation in the Indo-Pacific and beyond,” Sandhu said.

This was the second phone call between Biden and Modi after the November 3 presidential elections and the first one since Biden assumed office on January 20.

The first one was on November 17 when they reiterated their firm commitment to bilateral strategic partnership and discussed shared priorities such as COVID-19, energy and climate change, and cooperation in the Indo-Pacific region, Sandhu said in an earlier interview last week.

These conversations have been very warm and forward looking, according to the Indian envoy.

Biden is known to be a strong proponent of closer India-US ties since his days as a senator in the 1970s and played a key role in getting the approval of the Senate for the bilateral civil nuclear deal in 2008.

The strategic and defence ties between India and the US witnessed major expansion during Barack Obama’s presidency and Biden, as the vice president, had played a key role in it. PTI