Had often embarrassed the Nitish Kumar government by his outspokenness 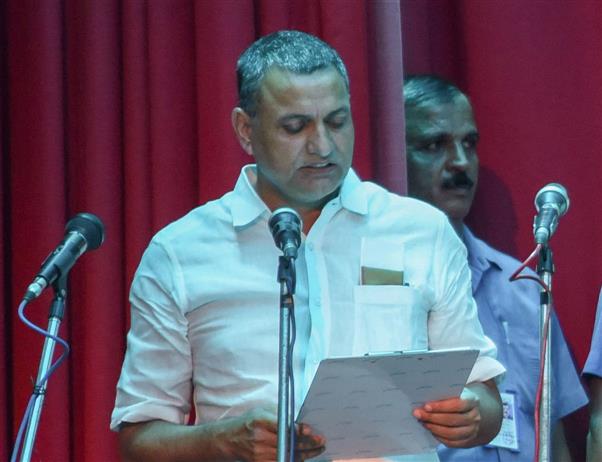 Though the minister could not be reached for his comments after the drastic step, his father said Sudhakar Singh had lent his voice to the concerns of the farming community “but sometimes, this is not enough. Sacrifices have to be made. Therefore, the agriculture minister has sent his resignation letter to the government”.

Jagadanand Singh, whose proximity to RJD president Lalu Prasad and heir apparent Tejashwi Yadav has earned him a second consecutive term as the state unit chief, cryptically added that the move was taken “because we did not want the rift to widen” (hum nahin chahte hain ki ye ladaai aage badhe).

He invoked the memories of Mahatma Gandhi and Lal Bahadur Shastri, whose birth anniversaries fall on October 2, and added that his son had walked in their footsteps by empathising with the farmers.

A first-term RJD MLA from Ramgarh, Sudhakar Singh had left the chief minister fuming by candidly speaking about corruption and bureaucratic high-handedness in his department on several occasions.

The BJP, which has been licking its wounds since losing power in the upheaval triggered by Kumar's exit from the NDA, latched on to the opportunity.

“Sudhakar Singh had been raising his voice against ‘afsarshahi' (bureaucratic high-handedness). This is something that Chief Minister Nitish Kumar cannot tolerate. Hence he has been made to resign”, said state BJP president Sanjay Jaiswal.

The BJP had raised a hue and cry when Singh was inducted into the cabinet over a case relating to default on payment by a rice mill owned by him.

Singh had started his political career as a BJP leader and contested from Ramgarh on a party ticket in 2010 when he ended up losing his deposit.

The multi-party “Mahagathbandhan”, which includes RJD, the CM's JD(U), Congress, and the Left, appeared to be in a state of confusion over the sudden move by the minister.

“We do not know to whom the resignation has been submitted. Unless there is something official, we cannot comment”, said Congress spokesperson Asit Nath Tiwari whose party has been an old RJD ally.

RJD sources said Sudhakar Singh is understood to have submitted his resignation not to the chief minister but to Tejashwi Yadav, who is the deputy CM, leaving the ball in the latter's court.

JD(U) parliamentary board chief Upendra Kushwaha said “the development is not going to affect the stability of the government. Sudhakar Singh had said in the past that he will resign when being told to do so by Lalu and Tejashwi. Maybe he got the orders”.

If the resignation letter gets accepted, Sudhakar Singh will be the second minister to exit the “Mahagathbandhan” cabinet.

Last month, fellow RJD leader Kartik Kumar resigned after he felt slighted over being relieved of law portfolio, which was linked to a controversy over his alleged involvement in a kidnapping case.