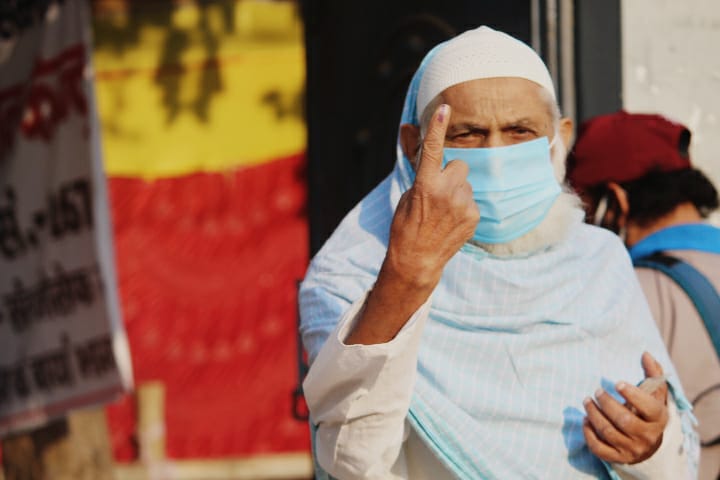 Of the nearly 2.15 crore electors eligible to exercise the franchise, 1.12 crore are male voters, 1.01 crore are female Photo credit: Twitter/CEOBihar

The coronavirus pandemic did not have much impact on the voter turnout in the first phase of Bihar assembly polls as an estimated 53.54 voters exercised their franchise compared to 54.75 per cent in these districts in 2015, according to provisional figures.

This is the first major election being conducted amid the raging COVID-19 pandemic in the country.

The 2020 poll percentage is likely to go up as the Election Commission is updating the data with more inputs from 71 constituencies spread across 16 districts.

According to the provisional data, the highest poll percentage is recorded in Banka district at 59.57. It had recorded 56.43 per cent out in 2015 polls.

Munger district has registered the least voter turnout at 47.36 per cent. It had recorded 52.24 per cent turnout in 2015.

Out of the 71 constituencies, 35 are in Naxal-hit areas where the polling hour was curtailed.

Polling was conducted till 3 PM in four Naxal-affected constituencies of Chainpur, Nabinagar, Kutumba and Rafiganj while in the other five Naxal-hit constituencies it went up to 5 PM.

Prime Minister Narendra Modi appealed to people to follow all COVID-19 norms while going to cast their votes.

"I urge all voters to ensure their participation in this festival of democracy taking all COVID-19 related precautions. Keep ‘do gaj ki doori' (maintain a distance of two yards,) and wear mask mandatorily. Voting first, breakfast later," he tweeted.

As the polling began, Congress leader Rahul Gandhi urged people to cast their votes in favour of the Mahagathbandhan for "justice, employment and farmers-workers".

"This time for justice, employment, farmers-workers, your vote should be only for 'Mahagathbandhan' (grand alliance)," Gandhi said in a tweet in Hindi.

"Good wishes to all of you on the first phase of Bihar elections," he tweeted with the hashtag in Hindi 'Aaj Badlega Bihar'.

In the remaining 26 Naxal-affected constituencies, polling was held till 4 PM.

The poll panel said that since the announcement of the elections, 534 arms, 193 cartridges and three bombs were seized from the areas that went to polls in the first phase.

As many as 159 people were detained as a preventive measure during the polling on Wednesday, the poll panel said.