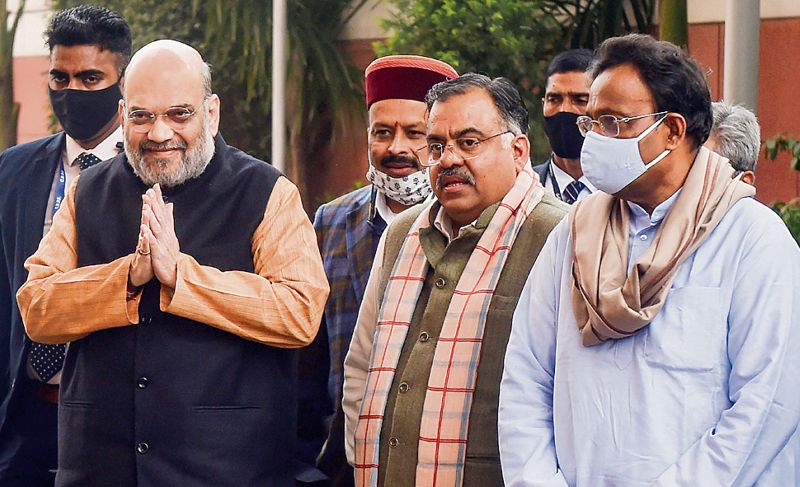 The BJP today formally announced an alliance with Apna Dal and Nishad Party for the Uttar Pradesh Assembly poll, terming “social justice and overall development” as chief guiding principles of the coalition.

Though the alliance leadership said seat-sharing formula was ready, they didn’t divulge details. While the alliance was being considered a done deal, sources said the aim behind today’s press conference by BJP chief JP Nadda, Apna Dal’s Anupriya Patel and Nishad Party’s Sanjay Nishad was to send across a message to various backward classes in poll-bound UP.

Several top leaders from the community, including a few ministers, had recently switched from the BJP to the Samajwadi Party (SP).

Both Apna Dal and Nishad Party draw support from sections of backward castes. The Akhilesh Yadav-led SP too has stitched pacts with several caste-based parties.

Flanked by Anupriya Patel, a Union Minister, and Sanjay Nishad, Nadda said the NDA would “contest and win” the elections under Prime Minister Narendra Modi’s vision of ‘Sabka saath, sabka vikas, sabka vishwas’. Nadda also lauded the Yogi Adityanath government for its “good performance” in terms of law and order, industrial investment and social welfare. “Development, social justice, pro-women and pro-backward class policies are the key achievements of the BJP’s double-engine government in UP,” he said.

Patel and Nishad hailed the Modi regime for granting constitutional status to the OBC commission and giving the community reservation in education, including the NEET. They also hit out at the BJP’s rivals for allegedly denying a large section of backward classes their rights.

Nishad also accused the past governments of discriminating against backward classes and Dalits. Quoting Fisheries Ministry as one of key achievements, he listed various Union Government schemes for his constituency.

Samajwadi Party patriarch Mulayam Singh Yadav’s daughter-in-law Aparna Yadav joined the BJP on Wednesday, asserting that she has always been impressed with PM Modi. Aparna is married to Prateek Yadav, son of Mulayam’s second wife while SP chief Akhilesh is his son from the first marriage.