The manifesto is released by BJP president JP Nadda at Kamalam, the party office in Gandhinagar 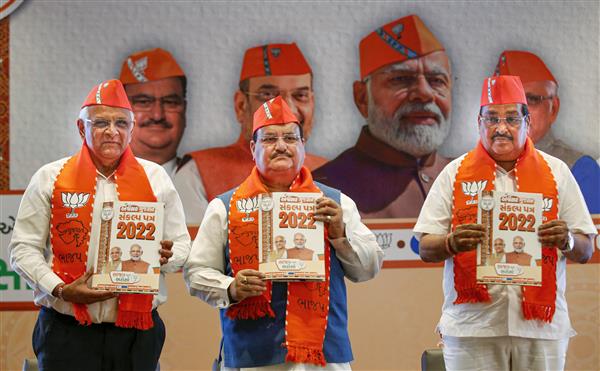 Five days before the Phase 1 elections for the Gujarat Assembly on December 1, the BJP on Saturday released its ‘Sankalp Patra’ (manifesto), promising to ensure complete implementation of the Gujarat Uniform Civil Code Committee’s recommendations, generating jobs, "anti-radicalisation cell" and a law pertaining to damages to public property

The manifesto was released by BJP president JP Nadda at Kamalam, the party office in Gandhinagar.

The party also assured generating 20 lakh jobs in the state and making Gujarat "1 trillion economy by making it FDI destination".

"For the progress of Gujarat, we will make Gujarat's economy equal to that of a 1 trillion economy by making the state a foreign direct investment destination," Nadda said at the event.

Nadda said the BJP "will create an anti-radicalisation cell to identify and eliminate potential threats, and sleeper cells of the terrorist organisations and anti-India forces".

The BJP will also make a law pertaining to damages to public property. "The law will be regarding recovery from anti-social elements who damage public property and attack private property," he added.

Calling Gujarat “a land of change-makers”, Nadda cited the example of Prime Minister Narendra Modi who started his journey from Gujarat.

Gujarat had given political direction to the country, he added.