Says finances of states, Centre under strain due to reduction in tax revenues, increase in health expenses 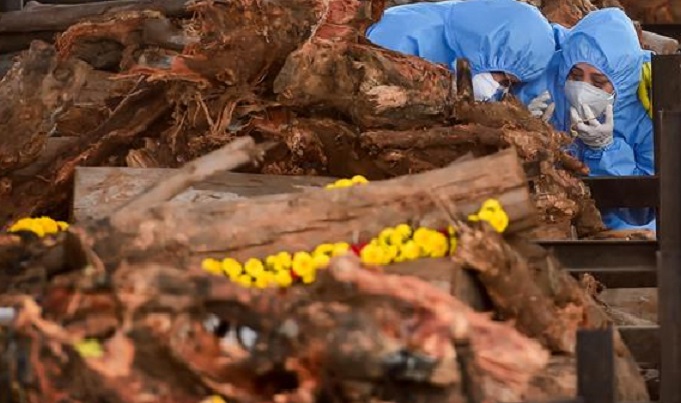 Relatives mourn the loss of a Covid patient. PTI photo.

Citing limited resources, the Centre has told the Supreme Court that giving an ex-gratia amount of Rs 4 lakh each to kin of Covid-19 victims wasn’t possible as it would affect pandemic response on other aspects, leading to more damage than good.

“Already the finances of State Governments and the Central Government are under severe strain, due to the reduction in tax revenues and increase in health expenses on account of the pandemic,” the Ministry of Home Affairs said in an affidavit filed in the top court.

The Centre cautioned the court against stepping into the domain of the executive as it might have unintended constitutional ramifications.

The entire amount of the State Disaster Relief Fund will end up being utilised for such payments, if such payments are made, it said.

“Utilisation of scarce resources for giving ex-gratia, may have unfortunate consequences of affecting the pandemic response and health expenditure in other aspects and hence cause more damage than good,” read the MHA affidavit.

The affidavit has been filed in response to a PIL seeking an ex-gratia compensation of Rs 4 lakh each to the families which lost their dear ones due to the pandemic. While issuing notice to the Centre, the top court had last month asked it to furnish the ICMR guidelines on death certificates for Covid-19 victims.

Highlighting that many families have lost their “sole bread earner”, petitioner advocate Gaurav Kumar Bansal had contended that under section 12(iii) of the Disaster Management Act, 2005, every family whose member died due to disaster was entitled for ex-gratia compensation of Rs 4 lakh.

However, the Centre said it was the “National Authority” empowered to recommend guidelines for the minimum standards of relief, including ex-gratia assistance and thus it is a “function entrusted to the authority by the law passed by Parliament”.

Noting that the term “ex-gratia” itself meant that it’s not based on legal entitlement, the Centre said an ex-gratia of Rs 4 lakh was beyond the fiscal affordability of state governments.

”It is well settled through numerous judgments of the Supreme Court that this is a matter which should be performed by the authority to whom it has been entrusted and not one where the court will substitute its own judgement for the decision to be taken by the Executive. Any attempt to second guess may create unintended and unfortunate Constitutional and administrative ramifications,” submitted the Centre, which had earlier told the court that the issue was under consideration.

Maintaining that it’s wrong to state that the help can be provided only through ex-gratia assistance as it would be a rather “pedantic and narrow approach”, the Centre said, a broader, sustainable and more prudent approach would involve health interventions, social protection, and economic recovery for the affected communities.

“Globally, the governments in other countries too have followed this approach, and have announced interventions that provide fiscal stimulus. The Government of India has followed a similar approach,” it said