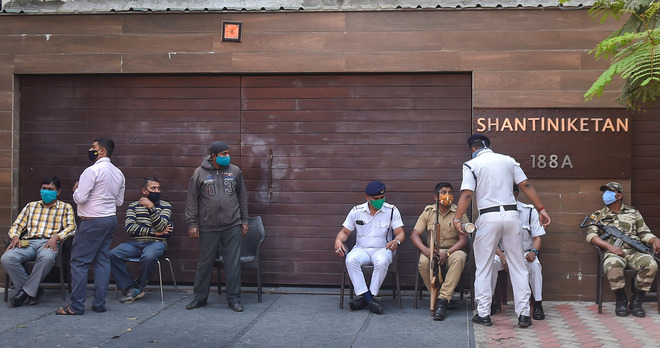 Police personnel deployed outside TMC MP Abhishek Banerjee’s Kolkata residence after a CBI team reached there in connection with a probe into an alleged coal scam on Sunday. PTI

The CBI on Sunday served a notice in connection with a coal scam to Rujira Naroola, wife of Abhishek Banerjee, Trinamool Congress (TMC) MP and nephew of Chief Minister Mamata Banerjee.

The CBI action, coming close on the heels of summons issued to Union Home Minister Amit Shah by a Kolkata court in a defamation case filed against him by Abhishek, has invited strong criticism from the TMC. 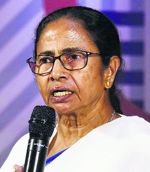 Don’t try to intimidate us with jail. We have fought against guns and are not afraid of fighting against rats—Mamata Banerjee, West Bengal Chief Minister

“We have full faith in the law of the land. However, if they think they can use such ploys to intimidate us, they are mistaken. We won’t be cowed down,” Abhishek said in a tweet.

Kunal Ghosh, TMC spokesperson, alleged that having lost all its original allies one after another, the BJP was now using the CBI and Enforcement Directorate (ED) as its new partners. The BJP hit out at the TMC, accusing it of politicising the matter, and said the law would take its course.

The agency team handed over the notice in connection with the case of theft of coal from the mines of Eastern Coalfields Ltd in West Bengal in which Anup Manjhi alias Lala is the alleged mastermind, sources said.

CBI officials, who went to Abhishek’s residence at Kolkata’s Kalighat area on Sunday, gave the notice asking Rujira to be present at her residence for questioning. The notice was under Section 160 of CrPC.

The CBI, it is learnt, wants some clarifications regarding financial transactions figuring in Rujira’s bank accounts, including one in Thailand.