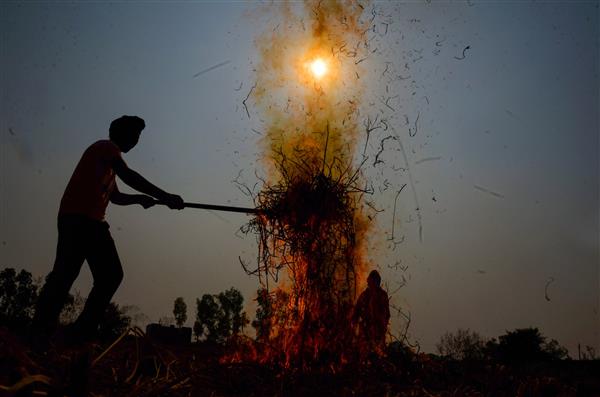 A farmer burns paddy stubble at a farm on the outskirts of Amritsar on November 22, 2021.? PTI file photo

Union Agriculture Minister Narendra Singh Tomar said on Saturday the Centre has agreed to farmers demand of decriminalising stubble burning and appealed to them to end their protest.

Tomar, in an official statement, said farmers’ two other demands, that of a minimum support price (MSP) and crop diversification—would be discussed, he said. This demand will also be fulfilled with the setting up of a panel as announced by Prime Minister Narendra Modi on November 19 on the day of Gurupurab.

“The farmers’ demand was to decriminalise stubble burning. The Government of India has agreed to this demand,” the minister said.

With regard to withdrawal of cases against farmers during the agitation, Tomar said this is in the domain of the state governments.

“Looking at the severity of the cases, the state governments have to take a call and the issue of compensation is also to be decided by them,” he said, adding that every state will decide as per their state legislations.

Stating that there is no justification for the continuation of the agitation after the government announced repeal of the three farm laws, Tomar said:  “Therefore, I appeal to all farmers organisations to end the protest ethically and show their big heart. They should return to their respective homes.”  The minister said the protesting farmers’ had initially demanded repeal of the three farm laws, which the government agreed to keeping  their interest in mind.

The Cabinet has approved a bill to repeal the three farm laws, which will be introduced in the beginning of the coming session of Parliament starting November 29, he said.

Tomar also said that the government is unhappy that it could not succeed in convincing some of the protesting farmers’ unions about the benefits of the farm laws.

It has been over a year now that farmers, especially from Punjab, Haryana and parts of Uttar Pradesh, have been protesting against the three farm laws at Delhi borders.

Although farmer unions have welcomed the government’s recent move to repeal the three farm laws, they said their protest would continue until the laws are totally and formally withdrawn and other demands, including legal guarantee to MSP, are met. — PTI