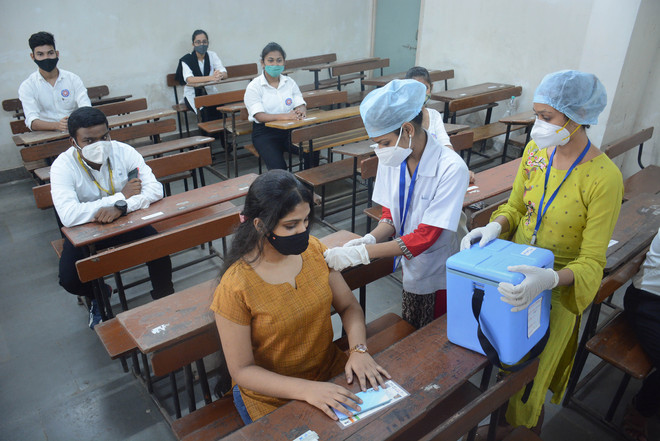 A student being inoculated by a health worker at a Thane college. PTI

The World Health Organisation met on Tuesday to discuss emergency use listing for the India-made Covaxin and decided to seek more clarifications from manufacturer Bharat Biotech.

After the meeting that ended late Tuesday in Geneva, WHO chief scientist Soumya Swaminathan tweeted, “The WHO’s independent technical advisory group has asked for additional clarifications from Bharat Biotech for global use of Covaxin. It will reconvene for the final assessment on November 3 if the data is received by then.”

Currently the WHO has included six vaccines in its emergency use list — Pfizer, Johnson and Johnson, SII-AstraZeneca, Moderna, Sinopharm and Sinovac.

Meanwhile, northern states, including Punjab, Haryana and HP, skipped a meeting called by Union Health Minister Mansukh Mandaviya today to review the challenge of over 11 crore second Covid doses being overdue and asked for the inoculations to be expanded.

The Health Ministers of 11 states — Arunachal, Assam, Bihar, Chhattisgarh, Delhi, Gujarat, MP, Sikkim, TN, UP and Uttarakhand — were present while the rest of the states were represented by health officials. — TNS