The Bill says although ‘only a group of farmers are protesting against these laws, the government has tried hard to sensitise the farmers on the importance of the farm laws and explain the merits through several meetings and other forums’ 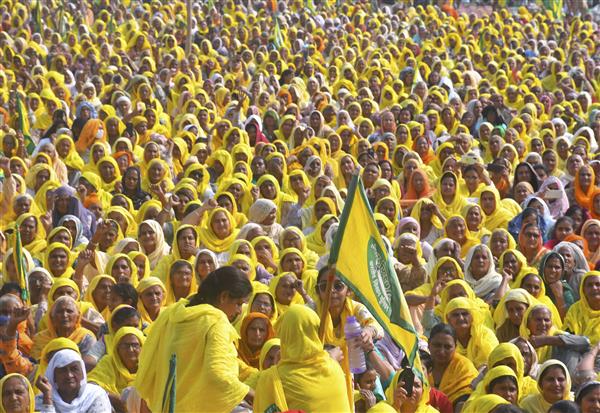 Women farmers gather at Tikri border to mark the one year anniversary of farmers agitation in New Delhi on November 26, 2021. PTI file photo

The central government will introduce a new Bill to repeal the three contentious agriculture laws in Lok Sabha on Monday.

The new Bill, which states that though “only a small group of farmers are protesting” against these legislations, the need of the hour is to take along everyone for inclusive growth, has been listed for introduction and passage in Lok Sabha on the first day of the Winter Session of Parliament.

It was passed by the Union Cabinet after Prime Minister Narendra Modi made an announcement that all three farm laws will be repealed in the Winter Session.

The ruling BJP and main opposition party Congress have issued whips to their MPs to be present on the day.

“Union Agriculture Minister Narendra Singh Tomar will move for leave to introduce a Bill to repeal the Farmers (Empowerment and Protection) Agreement on Price Assurance and Farm Services Act, 2020, the Farmers’ Produce Trade and Commerce (Promotion and Facilitation Act) Act, 2020, the Essential Commodites (Amendment) Act, 2020 and to amend the Essential Commodities Act, 1955. Also to introduce the bill,” Lok Sabha’s list of business for November 29, states.

Despite the prime minister’s surprise announcement to repeal the bills, farmers’ unions have announced that they will continue with their protest until their other demands are not met. However, they have called off their proposed tractor March to Parliament on Monday.

“To enable the farmers to sell their produce at higher prices and benefit from technological improvements, farmers have been provided access to agriculture markets which will help them increase their income. With this objective three farm laws...were enacted, as a part of the government’s endeavour to improve the condition of farmers including small and marginal farmers,” the Bill to repeal three farm laws states.

It also says that even though “only a group of farmers are protesting against these laws, the government has tried hard to sensitise the farmers on the importance of the farm laws and explain the merits through several meetings and other forums”.

Without taking away the existing mechanisms available to farmers, new avenues were provided for trade of their produce, the proposed legislation states. — PTI