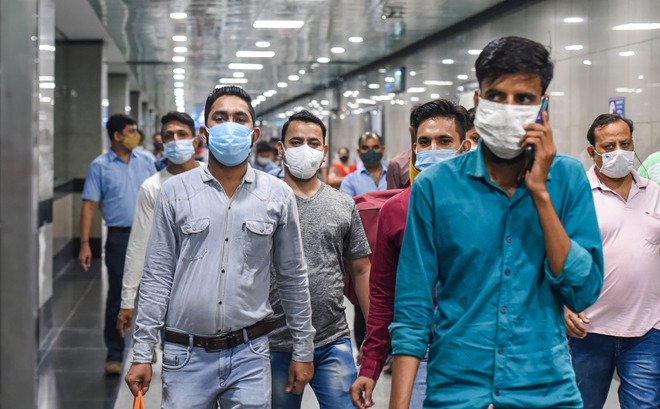 Passengers at a Delhi Metro station as services resumed on Monday. PTI

The government on Monday pledged free Covid vaccines for adults from June 21. Prime Minister Narendra Modi announced the decision to revert to the old system of centralised procurement of 75 per cent doses for free distribution to the states, as was the case before May 1.

In the wake of incidents of assault on doctors by relatives of patients, the Indian Medical Association (IMA) on Monday sought PM Narendra Modi’s intervention in ensuring “optimum milieu” for medical professionals so that they can work without fear.

2nd covishield dose after 28 days for...

The screening of children for trial of Covaxin, India’s first indigenously developed Covid-19 vaccine, among those aged between 2 and 18 started at AIIMS in New Delhi on Monday.

The PM said private hospitals could continue to procure 25 per cent of the vaccines, but their service charge would be capped at Rs 150 (as against Rs 300 at present) per dose over the fixed price of the vaccine.

Noting that the return to the centralised procurement was rooted in the demand of states, which felt the previous system (before May 1) was good, the PM in an address to the nation today said, “As many states, having realised the challenges of vaccine planning and supplies, demanded reconsideration of the vaccination strategy and reverting to the pre-May 1 system, the government has decided that the 25 per cent vaccination work set aside for states will now be undertaken by the Centre. This will be rolled out in two weeks.

The PM also announced the extension of Pradhan Mantri Garib Kalyan Anna Yojana until Diwali. “Till November, 80 crore people will continue to get a fixed amount of free foodgrain every month.

We will stand with the poor like a friend,” the PM said in the 33-minute address where he assured better vaccine supplies in the near future, informing the country that seven vaccines were under development and three in advanced stages.

He said two vaccines for children were also being tried and a nasal Covid vaccine was under test. In oblique references to the Opposition, which has been questioning the government’s vaccine policy, the PM said there was no place for political bickering on the issue. “Inoculation based on vaccine supplies is a collective duty,” PM Modi said, warning citizens against disinformation and advising them caution in the face of the unlocking process as daily cases dropped to 1,00,636 today, at a 61-day low.

Defending the government’s record, the PM said that between January 16 and April 30, the vaccination was progressing well under the aegis of the Centre and people were waiting for their turn to get the jabs but then a range of questions were raised.

“Questions arose about the lack of choice for states. Some asked why the Centre was deciding everything. Some sought flexibility in lockdowns, saying one size did not fit all. The argument was that health was a state subject. Demands for decentralisation of planning and priority to age groups came up. Several pressures were exerted. We decided not to object if states wanted to procure. But soon states realised the challenges and awakened to the reality of low global supply of vaccines.” explained the PM.

He hailed Indian scientists for the two made-in-India vaccines. Noting that India had administered 23 crore doses, the PM said India would speed up its vaccine pace.

“Until 2014, child vaccine coverage was 60%. We have brought it to 90% with our clean intentions, clear policy and diligence. Previously, India would wait for years to get a vaccine that was being developed abroad. Today, we have our own vaccines,” said the PM.

The Supreme Court had on May 31 called the Centre’s Covid 19 vaccine policy (free jabs for 45 plus and jabs at a price for 18 to 44-year-olds) “prima facie arbitrary and irrational”. The court had ordered the Centre to file an affidavit in two weeks.