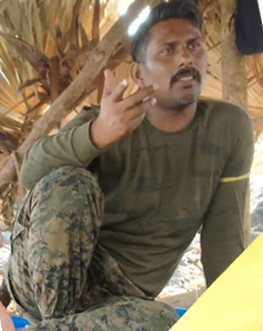 Photograph of Rakeshwar Singh Manhas sitting in a hut is purportedly released by Naxals. — Tribune Photo

The Communist Party of India (Maoist) on Wednesday demanded negotiations with the government for the release of Commando Rakeshwas Singh Manha.

While releasing a picture of the missing CRPF man from the Commando Battalion for Resolute Action (CoBRA), the Maoists claimed that the Commando was in the captivity of the Naxals.

Maoists claimed that Manhan has been missing since April 3 from the Sukh-Bijapur border in Chattisgarh. Reportedly, he was searching the jungle area.

Along with the picture, the Maoist party also shared a two-page letter and said that it was willing to negotiate with the central government, and also asked to appoint a mediator to negotiate the release of Manhas.

Media reports stated that Manhas's wife Meenu has again requested the government to take the necessary steps to seek the release of her husband.

“Senior officials take action against jawans who join duty one day late after completing leave. Why are the officials not acting swiftly on my husband’s case? Please appoint mediators and expedite the process of releasing my husband at the earliest,” Meenu was quoted saying.

In the April 3 encounter, 24 security personal died, 31 were injured and one is in their custody. Maoists admit that they had also lost four men in the fight between them and the CoBRA men.