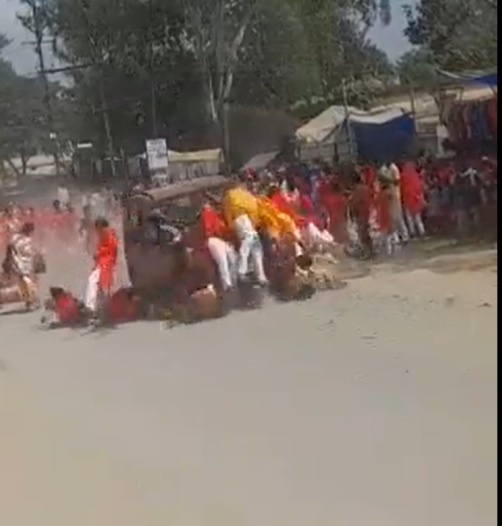 One person was killed and 17 others were injured, two of them critically, when an SUV ploughed into a religious procession at Pathalgaon in Jashpur district of Chhattisgarh on Friday afternoon, police said.

The incident took place around 1 pm when residents of Bazarpara locality had taken out a procession for the immersion of Goddess Durga idols, district Superintendent of Police Vijay Agrawal said.

The vehicle, a Mahindra Xylo with registration number from neighbouring Madhya Pradesh, was coming from Kansabel side when it ran into the procession, the SP said.

Gaurav Agrawal (21) died in the incident, while 17 others suffered injuries.

Two occupants of the SUV, Bablu Vishwakarma (21) and Shishupal Sahu (26), natives of Singrauli in Madhya Pradesh, were later arrested from the outskirts of the town.

“Station House Officer (SHO) Pathalgaon Sant Ayam has been transferred to Police Lines here while Assistant Sub Inspector KK Sahu, against whom locals had made several complaints, has been placed under suspension,” the SP added.

When the accused were nabbed, the SUV was found to be burning. Locals claimed that the two were smuggling ganja (cannabis) and set the vehicle on fire themselves to destroy evidence.

Tension prevailed in the town after the tragedy and a large number of people gathered outside the Pathalgaon police station.

An eyewitness, who said he was a member of the Samiti (committee) which had organised the procession, alleged that the police allowed the SUV to pass even though it was suspected to be carrying ganja.

“Gaurav Agrawal who was our samiti member died while several others including members of the band party which was playing music during the procession were injured,” he told reporters.

A video of the incident showed a speeding vehicle running over people. While many were thrown out following the impact, some were dragged along with the SUV for some distance before it sped away.

Terming the incident as “sad and heart-wrenching”, Chief Minister Bhupesh Baghel said the accused were immediately arrested and action has also been taken against some police officers who were prima facie found at fault.

“An inquiry has been ordered. No one will be spared. Justice will be done to all. May the departed soul rest in peace. I pray for the speedy recovery of the injured,” Baghel tweeted in Hindi.

Senior BJP leader and former Chief Minister Raman Singh demanded a compensation of Rs 50 lakh for the kin of the deceased.

Singh tweeted a video of the incident and wrote, “This video is very painful. In Chhattisgarh, the drug mafias have no fear of anyone. Will those taking out religious processions be crushed like this now?

“Jashpur SP should be removed immediately. The kin of the deceased should be given Rs 50 lakh compensation and immediate arrangements should be made for the treatment of the injured,” he demanded. —PTI

5 hours ago
3
Punjab THE TRIBUNE INTERVIEW