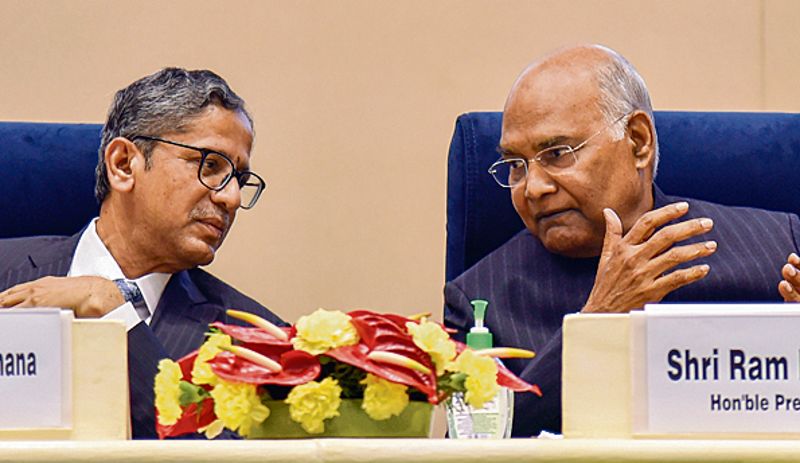 President Ram Nath Kovind with CJI NV Ramana during the valedictory ceremony of the Constitution Day celebrations in New Delhi on Saturday. PTI

Chief Justice of India (CJI) NV Ramana on Saturday said, “The legislature does not conduct studies or assess the impact of the laws that it passes, which sometimes leads to big issues and result in over-burdening of cases on the judiciary. He also highlighted that simply re-branding the existing courts as commercial courts, without creating a special infrastructure, would not have any impact on the pendency.

Addressing judges and lawyers, CJI Ramana said, “We must remember that whatever criticism or obstacle that we may encounter, our mission to render justice cannot stop. We have to march on in pursuing our duty to strengthen the judiciary and protect the rights of the citizenry.”

The CJI, who was speaking at the valedictory ceremony of the Constitution Day celebrations in the presence of President Ram Nath Kovind and Union Law Minister Kiren Rijiju, said the issue of pendency of cases in the judiciary was multi-faceted in nature and hoped that the government would take into consideration the suggestions received during this two-day programme and resolve the prevailing issues.

The government was sensitive to the needs of strengthening the judicial infrastructure and committed to investing maximum resources for developing next generation infrastructure, he added.

The CJI thanked the Law Minister for approving Rs 9,000 crore for development of judicial infrastructure even as he said the problem was not about funds but their under-utilisation.

He reiterated his demand for a special purpose vehicle in the form of judicial infrastructure authority to ensure proper utilisation of the funds meant for the judiciary.

He complained that some states were not contributing their share towards this purpose. “Unfortunately, some of the states are not giving their share of money as a contributing share. So, no infrastructure schemes are taking off. This is the reason why I am strongly advocating the creation of a National Judicial Infrastructure Corporation,” the CJI said.