Countries agree to ‘phase down’ rather than ‘phase out’ coal 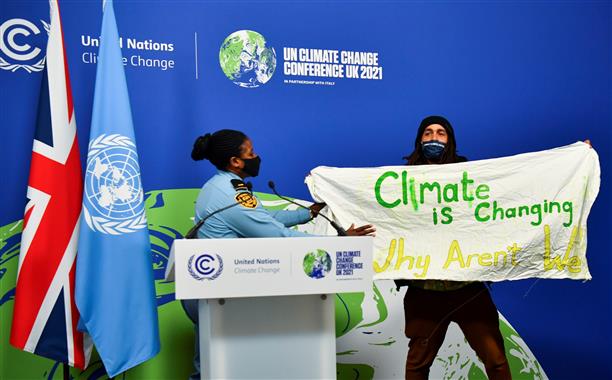 A protester holds a banner during the UN Climate Change Conference (COP26) in Glasgow, Scotland, Britain, on November 13, 2021. Reuters

The COP26 climate summit that ended with the Glasgow Climate Pact called for coal “phase down”, basically encouraging nations to accelerate away from polluting energy.

Developing nations India and China raised the last-minute change of fossil fuel language in the pact, toning it from a “phase out” to a “phase down” of coal. After initial objections, opposing countries ultimately conceded.

Earlier, Environment Minister Bhupender Yadav, who had disagreed with the language on fossil fuel, said developing countries are “entitled” to use fossil fuels.

Glasgow also failed to deliver on the loss and damage facility for the most vulnerable and on paying the cost of emissions and historic responsibility of climate change created by developed countries. In other words, there was not much progress on issues related to finance and loss and damage financing.

Despite progress on future emissions reductions, COP26 failed those most impacted by the climate crisis now. The EU and US refused to create a fund that the poorest countries could draw on for crisis response, outraging small islands and vulnerable nations, observers said.

Environmentalists termed the text “meek and weak” saying that the 1.5C goal is “barely just alive, but that a signal has been sent in the era of coal”.

An unprecedented fossil fuels phase-out pledge that was weakened by China, the US, the EU, and India is still there. The change in language was condemned by small island states, Switzerland, Mexico, and ironically the EU, which decided to support the shift despite slamming it as a “bad economic choice”, they said.

Supporters, however, argued that the text “has sought to narrow the gap to the 1.5C goal and put in place processes for it to continue to narrow, and narrow faster in future”.

Despite the watered-down phrase on coal, the cause of the climate crisis has for the first time since the Kyoto Protocol been called out by the 198 signatories of the Paris Agreement.

The first-ever mention of coal phase down in an international climate agreement is an important indication of the energy transformation underway. India, with its RE expansion is well placed to deliver on the scale of change needed, they said.

In his emotional address, UK COP26 President Alok Sharma said he was “deeply sorry” for the way the process had unfolded. “I understand the deep disappointment. It’s also vital we protect this package,” Sharma was quoted as saying.

The EU and the US also failed to deliver the promised $100 billion or nail down to $600 billion in climate finance between 2021-25. In other words, developed countries have slipped back to a commitment of $100 billion a year, now in place since 2009 and as yet undelivered, but remains urgent and central to ambitious climate action.

“There is nothing much. There is no real commitment on part of developed countries to move ahead with serious and urgent domestic action, let alone in terms of global collaboration and truly significant climate finance for tackling climate change,” says Manjeev Puri, from Teri.

The EU and US blocked the establishment of even a modest fund to help vulnerable communities around the world with the massive loss and damage they are experiencing at the hands of the climate crisis. As with COVID, those with the least resources have been left to fend for themselves.

The closure of the Paris rules on carbon markets is a move forward, but loopholes still need to be addressed, observers said, adding that “COP26 is real progress, but much more is still to be done”.

This COP was about keeping 1.5 degrees alive. It has, to an extent, reflected the findings of the IPCC SR1.5 and IEA net zero report, mandating an acceleration in action and new plans by 2022 in the context of the voluntary, non-binding UN regime. All major emitters will be compelled to return in 12 months and explain at the UN how their economy-wide policies and plans are aligned to the Paris temperature goals, they said.

However, the test of COP26 will be the delivery of promises. The next 18 months are crucial in determining whether countries take action aligned to 1.5C—that means cutting emissions by 45% by 2030.

Ulka Kelkar, Climate Programme Director, WRI India said now that COP-26 has finalised the rules of carbon trading, India will be able to sell more than a million carbon credits from previous years, and can also create a domestic market for carbon trading.

“India will be affected by COP26 asking countries to phase out polluting coal power and withdraw inefficient fossil fuel subsidies. India will also have to join other countries to escalate emission reduction actions more frequently. This will not be easy for a lower- and middle-income country that is trying to lift millions of people out of poverty.

“India’s battle against climate change will be led by scaling up renewable energy, which will be the foundation of our net zero future; by industry, who will fight to stay competitive in the global economy; and by states and cities, who will need to urbanize with respect for nature,” Kelkar added.

*Agreement on new carbon market rules closes down some of the outrageous loopholes that had been considered and creates a structured trading regime between countries, but language isn’t clear enough to stop companies from manipulating the system.

*Agreement on 2025 as the date by when developed countries need to double their collective funds for adaptation, based on 2019 pledges

*Developing countries demand a loss and damage funding facility. This did not happen and the focus will shift to Egypt next year to deliver this