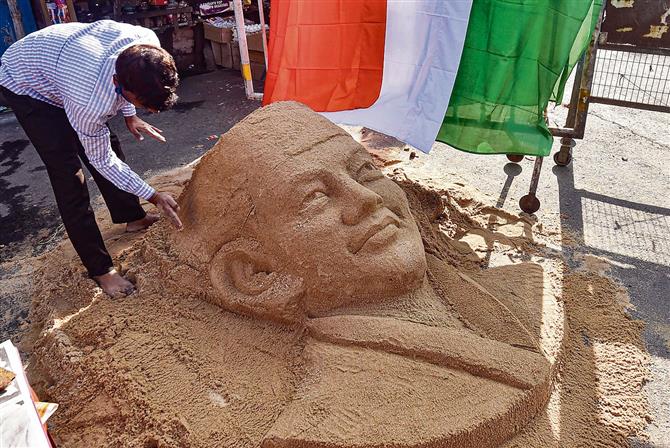 An artist makes a sand sculpture of Netaji Subhas Chandra Bose in Kolkata on Thursday. PTI

Two of Netaji’s grandnephews, both public figures, find the occasion appropriate to highlight the threat posed by communalism to the unity of the country.

Like previous years, the Netaji Research Bureau (NRB), headed by Netaji’s grandnephew Sugata Bose, will organise a function on January 23 to pay homage to the intrepid freedom fighter.

The Netaji Award instituted by the NRB will be this time given posthumously to Abid Hassan, a close associate of Netaji, who sailed with him in a German U-boat in 1943 on Bose’s voyage to South East Asia in the middle of World War II.

Sugata, who teaches history in the prestigious Harvard University, and also a former Trinamool Congress (TMC) Lok Sabha member, is also slated to give a speech on Saturday on the subject of “Netaji, Abid Hassan and the unity of India”.

In the biography of Bose written by Sugata (“His Majesty’s Opponent”), he has chronicled how Netaji was able to overcome the challenge posed by varied religious affiliations of the personnel of the INA.

“The treatment meted out to minorities is tragic and far removed from Netaji’s ideals,” Sugata Bose told this reporter while explaining why he would be speaking on the issue of unity of India in the context of Netaji and Abid Hasan’s relationship.

Despite being the chief of Netaji Research Bureau, which has played a key role in documenting information about Netaji, Sugata has not been invited for either of the two programmes — a seminar at National Library and an exhibition on Netaji at Victoria Memorial — which Modi will be attending during his January 23 visit to Kolkata.

Chandra Bose, who too is a grandnephew of Netaji, said upholding the principle of secularism would be the best way to pay tribute to Netaji.