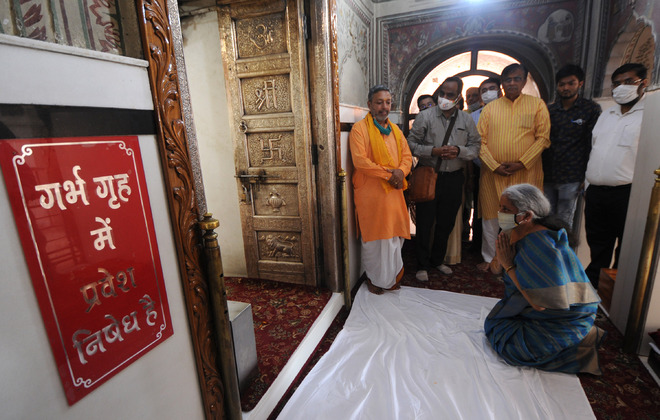 Despite Covid-19, one of the biggest crises of the century, Prime Minister Narendra Modi-led government did not let anyone sleep on an empty stomach. This was stated by Union Finance Minister Nirmala Sitharaman who was here today to attend a seminar on ‘Economic improvement, prosperity and Modi ji’, organised as a part of ‘Seva Samarpan Parv’ being celebrated across the country to mark the PM’s birthday celebrations. She said the Congress had left the economy in dire straits.

She said even during the lockdown period, the PM took regular meetings with officers to ensure empowering of every sector, poor, labourers and migrants. “Five major Atmanirbhar Bharat announcements are the result of the direct interaction, dedication and timely directions given by the PM,” she added.

The Union Minister said, “Since 2014, relentless reforms have been brought in by the Central Government. From legislative to administrative corrections, every possible effort was made to take India on the ‘atmanirbharta’ track and shifting the country’s economy from being fragile to the fastest growing.”

She said various digital and economic reforms had been made in every sector. While introducing digital reforms during the pandemic, money was transferred to Jan Dhan accounts of the eligible families at a click of mouse. “Today, everyone in India has a bank account,” said the Union Minister.

The Finance Minister said making youth skilled and employed was the utmost priority of the Centre.

Taking a jibe at the Congress, she said the party had left the country’s economy in dire straits and the present government was now paying the price. “Whatever we are earning, all is being used for the development of India. Unlike past governments, the money is not going into bank accounts of any particular family,” she said.

Earlier in the day, Sitharaman paid obeisance at the historic Mata Mansa Devi Temple. The Union Minister also oversaw a mega vaccination drive at the community centre in Sector 17. On the occasion, she also interacted with the beneficiaries.

She was accompanied by Haryana Speaker Gian Chand Gupta, state BJP president OP Dhankar and Ambala MP Rattan Lal Kataria during her stay in the district.