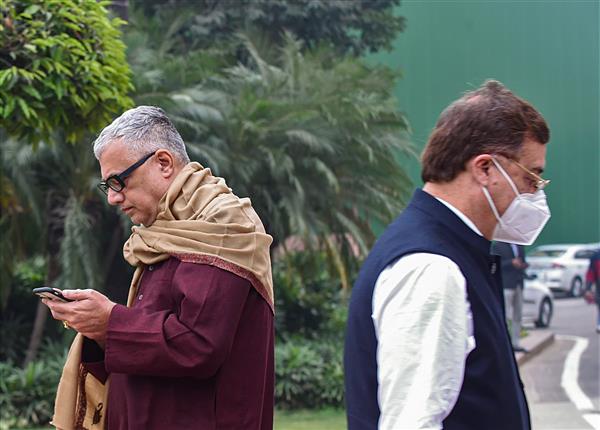 The debate on the relevance of erstwhile Congress-led United Progressive Alliance’s relevance intensified on Thursday with the grand old party and rival forces within the non-BJP camp taking strong, divergent positions.

A professional without ideological commitment is free to advise parties and individuals on how to contest elections, but he cannot set the agenda of our politics Pawan Khera, Congress spokesperson

While former Congress president Rahul Gandhi attended the protest by 12 suspended Rajya Sabha MPs in the Parliament House Complex signalling opposition solidarity after Mamata Banerjee on Wednesday said there was no UPA, TMC chief’s election strategist Prashant Kishor in a veiled swipe at Rahul remarked that the Congress leadership was not one individual’s divine right.

Kishor’s comments came after Congress veteran Kapil Sibal today said, “Without the Congress, UPA will be a body without soul and it is time to show opposition unity.”

Kishor, credited with Mamata’s Bengal poll sweep against the BJP, however, argued that the opposition leadership needs to be decided democratically.

“The idea and space that the Congress represents is vital for a strong opposition, but Congress’ leadership is not the divine right of an individual, especially when the party has lost more than 90 per cent elections in the last 10 years. Let opposition leadership be decided democratically,” Kishor tweeted, voicing the discomfort among parties like the NCP and TMC over acceptance of Rahul as the non-NDA block’s leader.

The matter of UPA chairpersonship has also been debated for some time with some opposition leaders privately calling for NCP chief Sharad Pawar’s elevation in the wake of Congress president Sonia Gandhi flailing health.

The Congress, however, maintained again today that it remained the principal opposition party nationally being in direct fight with the BJP in most states and that no anti-BJP alliance could succeed without it.

Reacting to Kishor, Congress spokesperson Pawan Khera said, “The individual (read Rahul Gandhi) being discussed is pursuing his divine duty to struggle and save Indian democracy from the RSS. A professional without ideological commitment is free to advise parties and individuals on how to contest elections, but he cannot set the agenda of our politics.”

The TMC, meanwhile, continued to aggressively posture as an opposition block parallel to the Congress with its parliamentary leaders skipping meetings hosted by Mallikarjun Kharge, Leader of Opposition in the Rajya Sabha for evolving joint floor strategy in the wake of the suspension of 12 MPs.